Despite the horrifying, potentially fatal drop, the man survived. He was treated for serious but non-life threatening injuries. 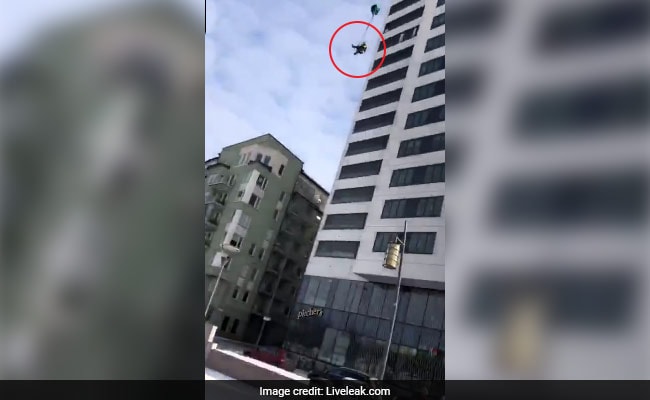 The thrillseeker jumped from a skyscraper in Stockholm on Sunday

Against all odds, a base jumper from Sweden is lucky to be alive as he slammed to the ground from a 246-foot-tall building after his parachute failed to deploy.

The thrillseeker jumped from a 24-storey building in Sweden's capital Stockholm, presumably for a stunt. Moments after he leaped off the skyscraper, the parachute failed to open resulting in the man hitting the concrete.

But despite the horrifying, potentially fatal drop, the man survived.

The barely 10-second jump was filmed by a friend who saw the base jumper plunge to the ground. The video stops before he is seen hitting the ground.

The adventure enthusiast was rushed to hospital where he was treated for serious but non-life threatening injuries, The Sun quotes Swedish newspaper Dagens Nyheter.

(The video could be disturbing for some viewers. Viewer discretion advised)


According to Daily Mail, the shocking incident was reported from the Swedish island of Kungsholmen on Sunday.

After the man's unsuccessful attempt, his friend jumped from the same building shortly after but landed safely on the ground, Dagens Nyheter reported.

Promoted
Listen to the latest songs, only on JioSaavn.com
Stockholm Police told the newspaper that base jumping from buildings isn't illegal as long as proper permission is sought to access the roof or floor to make the jump.

Base jumping involves leaping off a fixed structure or a cliff with a parachute or wingsuit. The acronym BASE stands for building, antenna, span and Earth (cliff).Click for more trending news