Video: Bank Of Lisbon Brought Down In One Of World's Biggest Demolitions

The 22-storey Bank of Lisbon was demolished in less than 30 seconds. 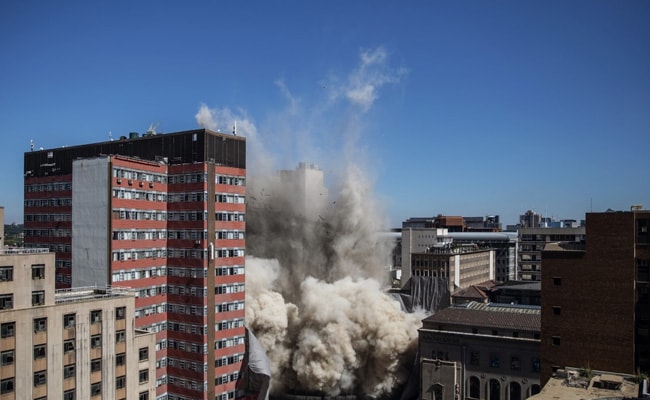 The Bank of Lisbon was brought down in a controlled explosion.

The Bank of Lisbon building in Johannesburg was demolished on Sunday after a fire last September. The Gauteng provincial government made the decision to implode the building following a structural assessment conducted after the fire that claimed the lives of three firemen. The building was deemed unsafe and marked for demolition.

According to news website IOL, the 22-storey structure was demolished in less than 30 seconds on Sunday morning. Thousands of Johannesburg residents watched the controlled explosion - one of the biggest of its kind in the world - for which 894 kg of explosives were used.

"It was the second-largest building to be demolished. It is standing at 108 metres, the tallest building ever to be demolished was at 114 metres," said Tasneem Motara, Gauteng Member of the Executive Council for Infrastructure and Property Development, according to Euro News.

She also added that the demolition was "probably one of the most difficult demolitions" they had worked on and that it was completed successfully.

Before the explosion, about 2,000 people from nearby buildings were evacuated. A video of the explosion shows plumes of smoke billowing into the air as onlookers watch.

A new building will be constructed to replace the Bank of Lisbon. It will also house provincial government departments.

Anand Mahindra's Hilarious Post On The Perils Of Marriage