US Woman Sends "Edible Resume" Printed On A Cake To Nike

A woman in the United States used an innovative technique to send her resume to the company she was applying - she printed it on a cake. 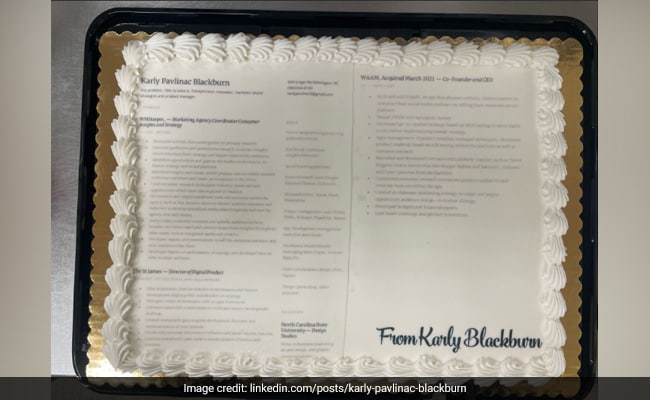 Picture shows a resume printed on a cake.

A woman in the United States used an innovative technique to send her resume to the company she was applying - she printed it on a cake. Karly Pavlinac Blackburn took to social media platform LinkedIn five days ago to reveal how she applied for a job in Nike. While sharing a post she also shared a photo of the cake having printed her resume on it.

"A couple of weeks ago I sent my resume on a cake to Nike. Yes, an edible resume on top of a cake. Nike was having a huge celebration for JDI day (Just Do It day). LeBron James, Colin Kaepernick + Other Megastars were at the event. I had done some research and found a division within Nike called Valiant Labs which is a startup incubator for Nike ideas," Ms Blackburn wrote.

She also said that the company is currently not hiring candidates for any position. She did this because she only wanted to let them know about her. "What better way than to send a cake to a big party. I was brainstorming with my former colleague Trent Gander. When he said, 'Karly do better, this is a creative place, show up in a creative way'," she added.

Ms Blackburn started thinking of getting an edible resume cake delivered to a party where she wasn't even invited. She also said that she wanted to go from North Carolina all the way to Beaverton, Oregon. The woman found a grocery store that made cakes with edible picture images on top. She got a delivery partner named Denise Baldwin that day whom she has given an important role in the entire plan.

Ms Blackburn talked to the delivery partner on the phone and he agreed to deliver her cake to the place she wanted to. Mr Baldwin took the cake to the party and when he was asked to leave the cake on the table at the front desk, he said, "No, I need to see this go in their hands. I promised Karly I would get this cake to the right person." He also navigated the Nike campus, all while having a sleeping child in one arm and a sheet cake in the other.

According to Ms Blackburn, she inspired Mr Baldwin that day which was a great achievement for her. "You have inspired me. This was meant to be. I am a mom and I am tired of doing Instacart. I know I have more abilities and qualifications to get something better. I'm so glad this worked for the both of us," Mr Baldwin told her.