Couple, Handcuffed To One Another For 123 Days, Splits Up Immediately After Cutting Chain

They did everything together for 123 days, including bathroom breaks and grocery shopping. 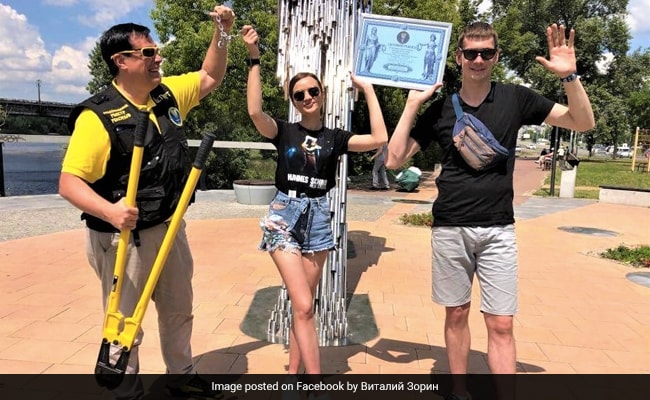 Alexander Kudlay and Viktoria Pustovitova handcuffed themselves to each other.

"Till death do us part", that is the vow that couples make to each other. To be by each other's side in sickness and in health, in highs and lows, and now, through pandemics and vaccinations. But a Ukrainian couple decided to take these promises a notch higher. They decided to be by each other's side not only through sickness and health but through the morning makeup sessions, bathroom breaks, outfit changes and grocery shopping trips as well. But how, you ask? They stayed handcuffed to each other for a record-breaking 123 days in a row.

On Valentine's Day earlier this year, 33-year old online car salesman Alexander "Sasha" Kudlay, and 29-year old beautician Viktoria "Vika" Pustovitova, from Kharkiv in Ukraine, made news by deciding to chain themselves to one another as a form of "experiment" to help fix the problem of their recurrent breakups

On June 17, 2021, they had the chainlinks cut from their wrists and decided to part ways, breaking up after a long 123 days of staying chained to one another and being by each other's side at every moment of every day. Giant chain cutters at the Unity Monument in the Ukrainian capital of Kyiv finally freed them of each other in a ceremonious chain-cutting ceremony in the presence of the press.

According to the Mirror, Viktoria shouted "hooray" after the chains were cut, adding that she is finally free.

This experiment and the consequent loss of their own private space was reportedly the reason behind the cancellation of their wedding plans as well. "Thank you all for supporting us. Look, we are now at a distance from each other. We were happy, and we are now happy to have had this experience in our lives," Alexander said, according to a report in the Daily Mail.

The difficulties that arose during their time staying handcuffed to one another was being documented by Alexander on their joint social media. He said, "As soon as we find one plus in a situation, immediately there are two minuses. Vika wants to get back to the rhythm of her earlier life, she misses what she used to love to do. She doesn't respond well to my suggestions to keep doing what she likes to do alongside me." After their breakup and their unchaining at the Unity Monument in Kyiv where they originally got chained, Viktoria reported commented that she wants to "live an independent life and grow as an independent person".

Would you perform this experiment with a loved one? Let us know in the comments