Jayne Bowman found a beautician on Facebook who performed fibroblast that left her with blotches. She is now asking people to stick to professionals. 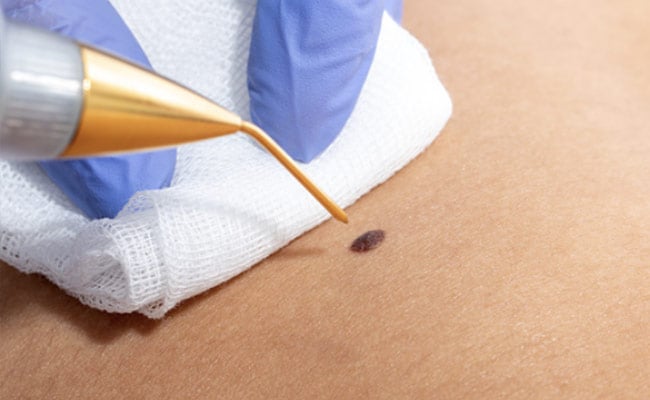 Jayne Bowman wanted to get rid of excess skin.

A woman has claimed that she has been left with a neck that looks like a lizard after a botched cosmetic therapy. According to Independent, Jayne Bowman from Hampshire in the UK, paid 500 pounds (Rs 48,000) to a beautician she found on Facebook for fibroblast to tighten the skin on her neck. However, after the treatment, Ms Bowman was left with hundreds of red blotches and scars, the outlet said. Though the dots have faded, Ms Bowman claims the fibroblast left her in "agony".

During the treatment, a device sends high-frequency electric current through the skin to encourage tissue regeneration. It is described as an alternative to laser, injections and surgery.

The 59-year-old was quoted as saying by Metro that she "can't bear" going outside anymore and wants justice for what she faced.

"I don't go out without a scarf on. In fact, I don't like going out at all, I'd rather go out in the rain where I've got a hood up and nobody can see me," she was quoted as saying by Metro.

"I'm not slating all beauticians because they're not all the same, but there are many of them out there that are bad. Stick to professional people," she added.

Ms Bowman started looking for a procedure to tighten her skin after losing weight by following a diet. "I was so proud of my recent weight loss, but I'd been left with excess skin that had left me with an unsightly double chin and I hated it," she told Metro.

She went on Facebook and posted messages on forums about good Botox clinic. A beauty therapist messaged her saying she could offer fibroblast therapy.

Ms Bowman decided to go for it after seeing great reviews on the beautician's page, but is now regretting her choice.