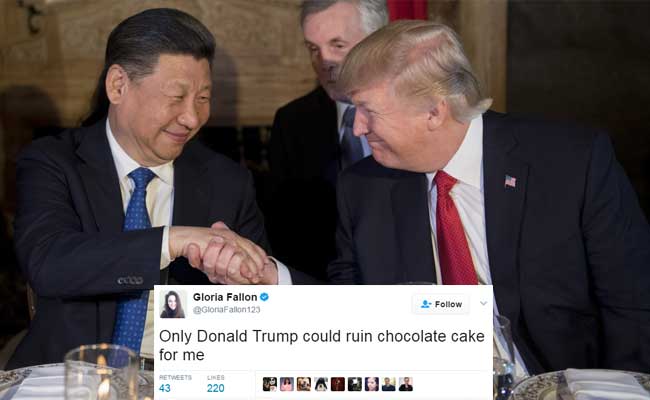 "We had the most beautiful piece of chocolate cake that you've ever seen," Donald Trump said.

NEW DELHI: US President Donald Trump brought upon himself the collective wrath of the Internet after statements he made during an interview aired on Wednesday. POTUS, in his interview, spoke about eating 'the most beautiful piece of chocolate cake' with Chinese President Xi Jinping when he ordered the airstrike on Syria. During the interview, he also confused the name of the country he launched the missiles at. The comments instantly drew a flood of reactions on Twitter.

"We had finished dinner. We're now having dessert. And we had the most beautiful piece of chocolate cake that you've ever seen and President Xi was enjoying it," Trump said in the interview. He goes to explain how that is when he received a message from the generals that "the ships are locked and loaded."

After praising their military technology and equipment, he spoke about telling the Chinese President about the strike. "I say, 'We've just launched 59 missiles, heading to Iraq.'"

"Headed to Syria," the interviewer corrected him. "Yes, heading towards Syria," saidTrump.

Leave it to Trump to ruin cake, too.

When Donald Trump mentions how much he likes chocolate cake pic.twitter.com/RPHzldk8rx

Only Donald Trump could ruin chocolate cake for me

In his most recent interview, Trump described a slice of cake with more passion and precision than he's ever brought to foreign policy.

Marie Antoinette: No one will ever be as tone deaf as me regarding cake

Donald Trump orders the airstrike on Syria, over a slice of chocolate cake. Mar-A-Lago, 2017 pic.twitter.com/4N8g7PvEOy

HOW TO LOSE WEIGHT:

Promoted
Listen to the latest songs, only on JioSaavn.com
2012: Juice Cleanse Diet

According to reports, the airstrike was in retaliation for Syria's alleged chemical attack which killed as many as 87 civilians, many of which were children.