Toddler Has The Cutest Reaction To Bruce Banner Turning Into Hulk. Watch 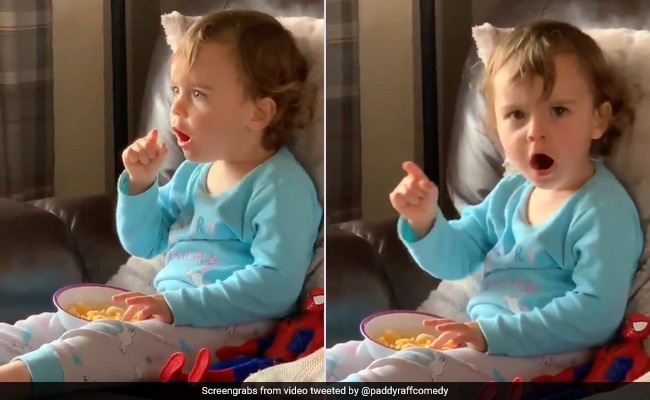 This toddler had such a cute reaction on seeing Bruce Banner turning into Hulk for the first time, even Mark Ruffalo was impressed. Two-year-old Clara Rafferty has gone viral online after her father, comedian Paddy Raff, shared a video of her reaction to Twitter on Wednesday, reports Belfast Live. The video has collected 8.8 million views and a response from Mark Ruffalo, who plays Hulk in the Marvel Cinematic Universe.

The video shows Clara, a resident of Belfast, reacting disapprovingly on "seeing the Hulk go bananas for the first time". Displeased with the superhero's angry green monster persona, she is seen wagging her finger at the screen and saying "No, no." She then looks completely shocked, jaw hanging open, before the video ends.

My 2 yr old daughter's reaction to seeing the Hulk go bananas for the first time 😂 pic.twitter.com/0lK0PbGWXi

The video has collected over 4 lakh likes since being shared on the microblogging website, along with 8.8 million views. It also caught the eye of Mark Ruffalo, who shared it while writing "The secret way of stopping Dr. Banner from turning into the Hulk." He added a green heart to conclude his tweet.

The secret way of stopping Dr. Banner from turning into the Hulk 🤫💚 https://t.co/4ZuYG5nEgs

Clara's father told Belfast Live he was shocked that the Hollywood actor shared the video. "It's a bit surreal that he's seen it and funny that she's oblivious to how many people have seen her reaction."

Here is how others reacted to the video:

Aww this reminds me of my now 17 year old daughter, who watched the first Hulk film at the same age and kept shouting
“Shrek is a bad man!”

And she keeps on eating! Brilliant! #kidsarethebest

This kid should be starring with The Hulk in the next Marvel spin-off titled:

What do you think of Clara's reaction? Let us know using the comments section.