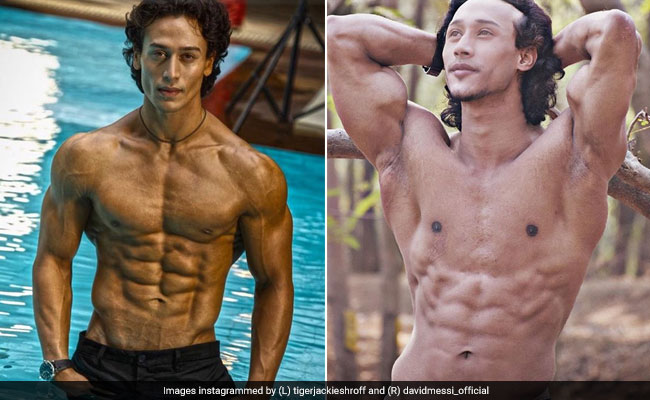 It seems like there may be some truth to the whole 'everyone has seven lookalikes'. However, if you're still on the fence about this, meet David Saharia. This model and fitness enthusiast from Mangaldoi, Assam has created something of a stir online thanks to his uncanny resemblance to Student of the Year 2 actor Tiger Shroff. The 22-year-old's posts on Instagram are flooded with comments mentioning the similarity between the two. Chances are, you'll think you're seeing double too when you see his pictures.

Nope, that isn't the Baaghi actor but David himself. His face, hairstyle and body does remind one of Tiger from his first few films, isn't it? The Heropanti actor now sports short hair.

David is aware of the comments comparing him to Tiger Shroff. "I am not even close to him. He's a different personality and so am I," David told NDTV. "I am big fan of him, his dance moves and his styles. But most of all, I like his fitness as I am a fitness enthusiast too," he added.

David started his journey with fitness in 2009 and is currently working in the Assamese film industry.

He posted this special video as well.

Instagram users cannot stop commenting about David's resemblance to Tiger Shroff. Many have even tagged the actor in David's pictures.

"@tigerjackieshroff have you seen your doppelganger?" one Instagram user comments. "You look like Tiger Shroff man," says another. "Second version of Tiger Shroff," says a third.

"I feel really great that my pics are going viral as this way everyone will know exactly who I am. And that's all because I too have my own identity, own dreams and goals," he told NDTV. He is hopeful that he will achieve his goals soon.

Do you think David Saharia looks like Tiger Shroff? Tell us using the comments section below.