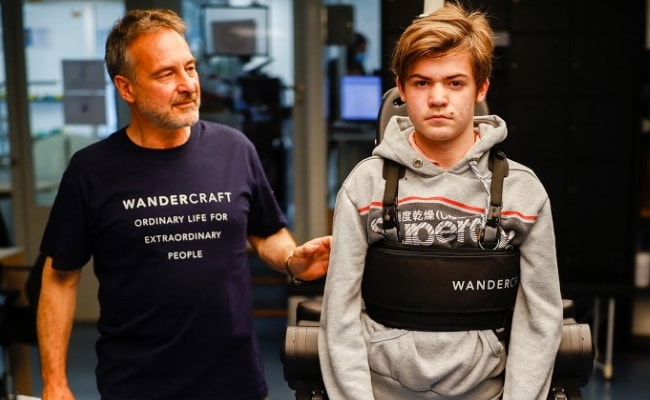 Oscar Constanza can stand upright, thanks to an exoskeleton built by his father. (Reuters)

Wheelchair-bound Oscar Constanza, 16, can now walk upright and he owes it to a robotic exoskeleton made by his father. The French teenager had been wheelchair-bound because of a genetic neurological condition that prevents nerve signals from reaching his legs. But things are about to change for him from now.

According to news agency Reuters, who posted the video on Twitter, the boy's father Jean-Louis Constanza is the co-founder of a robotic exoskeleton company named Wandercraft. His son was one of the main inspirations for him to start engineering these robotic entrapments.

The doting father is seen smiling while his son walks independently for the first time. He says, "One day Oscar said to me, 'Dad, you are a robotic engineer. Why don't you make a robot that would allow us to walk?"

The father's attempts were successful. Today, Oscar Constanza can walk with a degree of independence he had never known before. He says, "Before, I needed someone to help me walk... This makes me feel independent."

The exoskeleton is a massive black frame that supports and stimulates the body's movements. Oscar Constanza isn't the only one benefitting from it. Wandercraft has sold exoskeletons to hospitals in France, Luxembourg and the US. However, the frame is too heavy to be sold for private use and costs a whopping sum of $176,000.

An exoskeleton, which can be fastened to a person's shoulders, chest, waist, knees and feet, allows a 16-year-old with a genetic neurological condition to walk https://t.co/uD869TJX64pic.twitter.com/arHPW5mN3x

The tweeted video has amassed many reactions from users. One came up with a round of sceptical questions about how useful it can be during transportation, in restaurants or in toilets. He added, "If not, it's not much use."

But there are users who find it to be a good invention. One user commented, "Absolutely wonderful."

Others tried to clarify the usage and benefits of this exoskeleton. One user wrote, "It's not a feel good abled invention, it was made as a therapeutic device for PT sessions."

But, the point of this, from a much older Aussie article, it improves circulation and muscle atrophy. It's not a feel good abled invention, it was made es a therapeutic device for PT sessions.

However, many have quote-tweeted the video and rebuffed the idea of an expensive machine just for walking. One such user wrote, "These kinds of things just remind me that the world is not built to just let disabled people exist as we are... Not to mention nobody will be able to afford this lol."

these kinds of things just remind me that the world is not built to just let disabled people exist as we are, people always want us to be the least disabled possible and i'm so tired

not to mention nobody will be able to afford this lol https://t.co/XhhzcbjKpN

What do you have to say about this robotic exoskeleton?