This Snake Video Was Already Scary, Then Came An Unexpected Twist. Watch

The video shows the man struggling to remain upright while trying to get as far away from the snake as possible. Then... 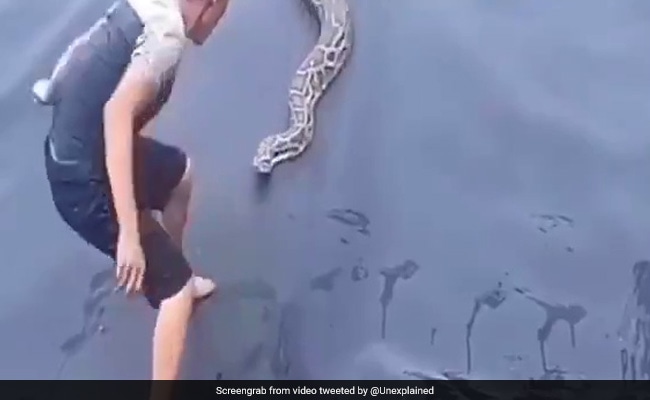 A man, a snake and a slide: Watch this viral video.

No one is sure about what exactly is happening in this video - but pretty much everyone agrees that they would not like to exchange places with the man in it. A video that has gone viral on Twitter features a snake, a man and an unexpected twist in the end. It has left people equal parts scared and amused.

The 20-second clip begins by showing a black slide leading into a water body. A man stands precariously on the narrow space where the slope meets water, trying to balance himself. Even as he watches, a snake slithers into water. After looking around uncertainly, the man makes the brave decision of plucking the snake out of water and grabs it with his bare hands. He seems to immediately regret his decision of pulling the reptile out - recoiling in horror as soon as the snake is back on dry land.

The video shows the man struggling to remain upright while trying to get as far away from the snake as possible. Unfortunately, this was not to be. In a completely unexpected twist, a second, bigger snake slithers down the slope at high speed as the first one disappears back into water. It is too much for the horror-struck man, who loses his balance and falls into the water along with the two serpents.

WTF is going on here pic.twitter.com/bWy1ro8833

The footage has garnered over 2 lakh views since being posted this morning on Twitter by an account named 'The Unexplained'. It was also shared on the 'Unexpected' subreddit on Reddit with the caption, "Don't mess with snakes."

Several Twitter users took to the comments section to say that they had not been expecting the second snake and shared the man's horror.

OMG!! I was not expecting that. I hate snakes.

he thought this snake was scary, the heart stop of seeing the second one must've been supernatural ???? pic.twitter.com/VPFfw0ZcwN

Others wondered what was happening in the video.