This happened - no prizes for guessing - in Australia. 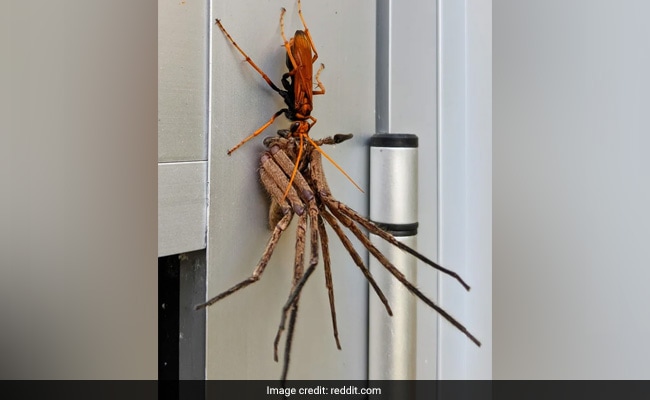 A pic of a huntsman spider and a tarantula hawk wasp has horrified many.

A horrifying photo of a spider wasp dragging a huntsman spider has gone viral online. This happened - no prizes for guessing - in Australia. The picture, which shows the orange wasp carrying the spider on its back, was shared on Reddit two days ago, where it has been 'upvoted' over 39,000 times.

Tarantula hawk wasps use their sting to paralyse their prey before dragging them to their nests. There, the spider's body is used as a living host for the wasp to lay an egg in, according to BBC. Huntsman spiders, meanwhile, are considered the world's largest spider by leg span.

"Got home from work to find this tarantula hawk wasp carting off a huntsman spider," wrote the Reddit user who shared the photo online, adding that the picture was clicked in Sydney.

Take a look at the picture that is terrifying the Internet:

got home from work to find this Tarantula Hawk wasp carting off a huntsman spider (Sydney, Australia) from r/pics

The picture has received over 3,600 horrified comments since being shared online.

"Please delete Australia," wrote one person. "Well I no longer want to be Australian. I'm moving to Poland where I will live my life as a goat," another said.

"Your country is filled with terrifying monster beasts," a third Reddit user added.

In June, a shot of a huntsman spider devouring a possum in Australia had left many shocked.