Many users on the internet wondered how did she pull off such head-spinning moves without toppling over? 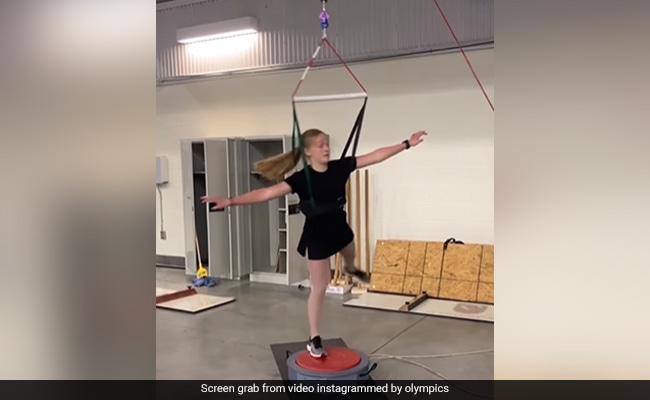 The video has amassed more than 1 million views on Instagram.

The official Instagram account of the Olympics shared a video of a figure skater named Elizabeth Day, practising spinning that might leave you feeling woozy. The Olympics shared the video on the occasion of World Skating Day, December 4. In the video, Ms Day can be seen whirling around with a mechanized spinning motor and harness attached to her shoulders.

Along with the video, the caption reads, "Just your usual off-ice #FigureSkating training. On #WorldIceSkatingDay, let's honour all the work and training done behind the scenes!"

The video has amassed more than 1 million views on Instagram. Many users on the internet wondered how did she pull off such head-spinning moves without toppling over? A user wrote, "Yikes. I got a headache just by watching that." Another user commented, "Anyone ever compared MRIs of figure skater's brains vs other athletes? Would love to see that."

"Music in my mind: helicopter helicopter," the third user joked. "I got dizzy watching this," expressed the fourth user. "This would save me so much money in amusement park admission! Where can I get my hands on one????? (jk... Unless....)," wrote the fifth user.

According to a CNN report, top figure skaters spin at as many as six revolutions per second. Experts shared that figure skaters occasionally tumble upon landing, but they mostly spin through the air without losing their balance. That's because they have conditioned their bodies and brains to quash that dizzying feeling.