The ducklings sleep in the dog basket with Fred and even swim in the castle moat with him! 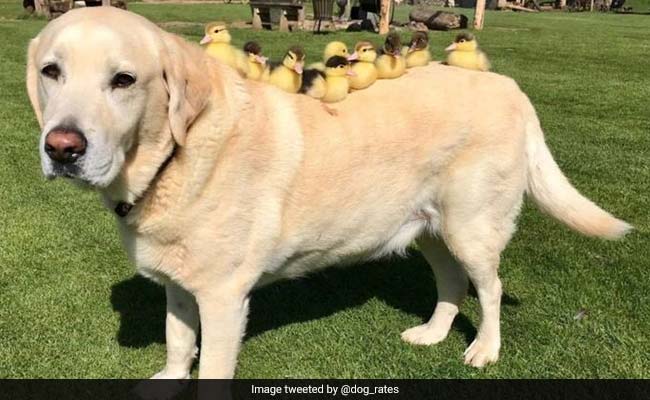 Fred and his baby ducklings at Mountfitchet Castle.

Fred, a 10-year-old Labrador has become a single dad after adopting nine orphaned ducklings. The resident dog of Mountfitchet Castle in Essex, UK, has become the Internet's favourite after his story was shared online.

The baby birds were found waddling alone around the castle after their mother disappeared.

"Fred the resident dog at the Castle stepped up to the challenge when nine little ducklings became orphaned last Thursday. The ducklings' mum had disappeared and a member of staff found them waddling around the castle grounds alone," wrote Mountfitchet Castle on Facebook.

Fred has been babysitting the ducklings ever since.


The BBC reports that they sleep in the dog basket with Fred and have even followed him for a swim in the castle moat.

"We brought the ducklings into the house as they are too young to fend for themselves, and Fred just took them under his paw - rather than his wing," said Jeremy Goldsmith, Fred's owner.

Pictures of Fred on baby duty were shared on the popular Twitter account, We Rate Dogs, where they have been liked over 1 lakh times.

This is Fred. He lives in an English castle with his nine fluffy children. Says being a single father is sometimes challenging, but always worth it. 13/10 for all pic.twitter.com/5yGoqQgPnU

I love Fred and his fluffy children https://t.co/goqbCbETIA

Mr Goldsmith says he only expects Fred's babysitting services to last another few weeks, after which the ducklings will be free to stay at the castle or leave.Click for more trending news