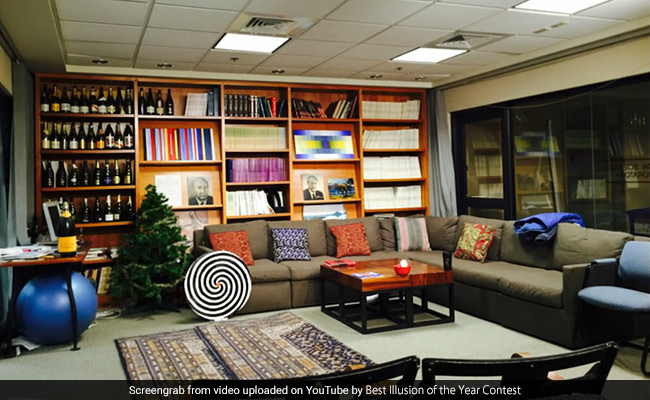 "The Changing Room Illusion" by Michael A Cohen: A still from the optical illusion video

Who doesn't like a little magic trick or optical illusion once in a while? Keeping in mind the sheer genius that goes into the design of great optical illusions, it is not surprising that there are contests to judge the most mind-boggling of these creations. A case in point is the Best Illusion Of The Year Contest for 2021, which lists and selects the most creative and ingenious illusions from around the world every year, making them reach a larger audience. This year, the best illusion award has gone to “The Phantom Queen”, which is a creation by Matt Pritchard of the United Kingdom.

According to the ‘Best Illusion Of The Year Contest' website, the event is a celebration of illusions and perception, “created by the ingenuity of the world's premier illusion creators”. The site further states that “visual scientists, ophthalmologists, neurologists, and artists make up the illusion community”.

A video of the illusion along with a description has been shared on the YouTube page of the contest. The winning creation features a chessboard and its reflection in a mirror. “However, there's a phantom White Queen piece that only appears as a reflection, leaving a mysterious empty square in the foreground,” the note reads.

Explaining further, the description adds, “The illusion is achieved by creating a camouflaged invisibility cloak that shields the Queen from one viewing angle. The shape and pattern of this shield also disguise its presence when viewed from a second angle that comes from the mirror's reflection.”

That's not all. The clip also shows various other ways in which the “anamorphic camouflage” can be used to create a remarkable magical appearance and an invisible cube.

The video has so far been viewed over 2.50 lakh times.

In second place on the list is “The Changing Room Illusion” by Michael A Cohen of USA. The illusion is based on the concept of "graduate change blindness". This is achieved by a video that features what appears to be static footage of a living room. But as you look closer objects appear to have been removed from the room or even added to it.

The third place was bagged by Dawei Bai and Brent Strickland for “The Double Ring Illusion.”

The contest is an initiative by Neural Correlate Society (NCS), a non-profit organisation that aims to promote scientific research “into the neural correlates of perception and cognition”. As per the website, the organization serves “a community of perception scientists, ophthalmologists, neurologists, and artists who use a variety of methods to help discover the underpinnings of illusory perception.”

The awards for first, second, and third place are chosen by online voters.