This 1,158 Kg Pumpkin Carves Out New US Record 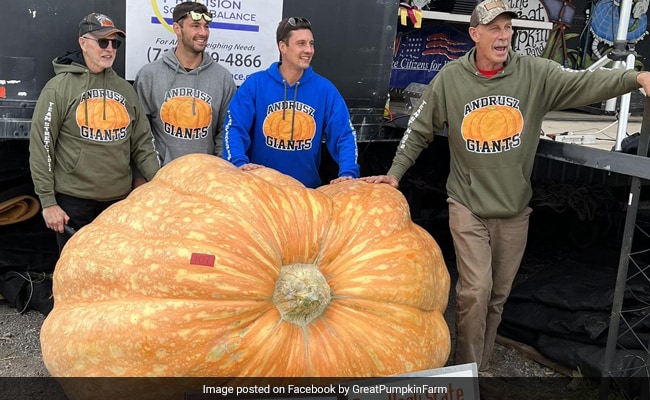 Mr Andrusz and his family grew the 1,158 kg pumpkin at their farm in Lancaster

On October 2, New York-based farmer Scott Andrusz won the World Pumpkin Weigh-Off competition held at the Great Pumpkin Farm. Mr Andrusz achieved this feat by growing the biggest pumpkin in the whole of North America. The pumpkin will be on display till October 16. The 63-year-old farmer presented the pumpkin that weighed 2.554 pounds (1,158 kg) and won the prize money of $5,500.

Mr Andrusz and his family grew the 1,158 kg pumpkin at their farm in Lancaster and had hoped to grow the heaviest pumpkin in New York but ended up winning the national championship, according to the Gothamist.

Mr Andruz said, "Give it all the best stuff you can think of to give it, all the fertilizer, kelp, worm castings, chicken refuse. And a ton of water. Every time she's thirsty you gotta go give her a drink."

Scott Andrusz told the publication that he will go into replenishing the soil for next year's competition with the $5,500 prize money.

He also shared that the most difficult task was protecting the pumpkin from cats and racoons. "All the animals and critters seem to love this pumpkin more than anything in the world. They all want to eat on it. And I have cats come and try to scratch it, they think it's a big couch," he said.

Scott Andrusz was close to breaking the Guinness World Record for the heaviest ever. It was set by an Italian farmer with 1,225 kg pumpkin.

Watch: Mother Elephant Teaches Her Baby How To Get Down Slope, Calf Fails Hilariously