They Went Out To Buy Groceries, Ended Up Getting Covid Vaccine. Here's How

David MacMillan and his friend were at a Giant Food store in the US capital last week and were surprised when a worker in the supermarket's pharmacy section offered them each a shot. 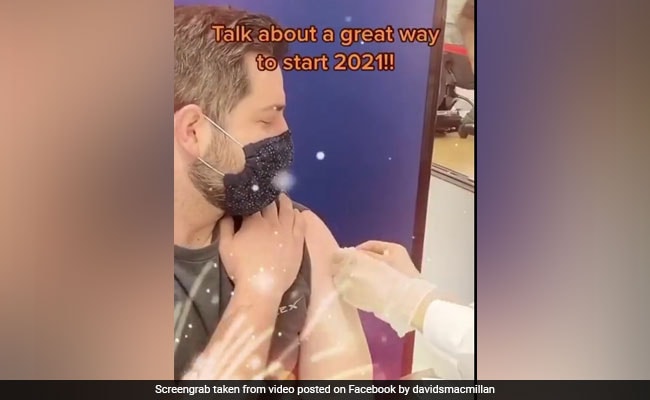 A Washington law student ended up getting more than just groceries during a recent supermarket trip, after randomly receiving a Covid-19 vaccination.

David MacMillan and his friend were at a Giant Food store in the US capital last week and were surprised when a worker in the supermarket's pharmacy section offered them each a shot.

Getting a vaccination had not been on the pair's shopping list, and currently the vaccine is being prioritized for emergency responders and other frontline workers.

MacMillan posted a recording of him getting the shot on TikTok, where it had been viewed more than 700,000 times on the short-form video sharing platform as of Monday.

He said he and his friend were offered the vaccine because health care workers had not shown up for their appointments to get the doses.

The Moderna vaccine must be kept at very cold temperatures and quickly spoils once it has been removed from the freezer and its lid punctured.

"It's important that when there's so much misinformation swirling, that people are able to see that this is a good thing, this is a positive thing. We should be excited about being able to deal with the pandemic," MacMillan told a local NBC News affiliate.

America's vaccination rollout has got off to a slower-than-anticipated start, with 4.2 million people so far receiving initial doses of the two-dose vaccines from Pfizer-BioNTech or Moderna -- far below official predictions of 20 million by the New Year.

MacMillan said he expected to receive the second dose in his vaccination later this month.

In a statement, Giant said: "The Moderna vaccine is valuable and lifesaving, and we are happy to have not wasted it and given this couple each a dose."

Bernie's Mittens To Lady Gaga's Skirt: Some Lighter Moments From The Inauguration