There's A Huge Python Hiding In This Pic. Can You Find It? 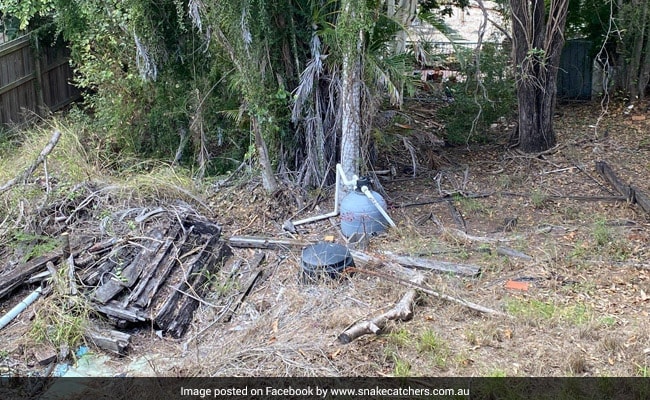 Can you spot the carpet python hiding in this pic?

Snakes are sneaky creatures. As hundreds of viral 'find the snake' pictures have shown, these reptiles are capable of sliding into the trickiest of spots and camouflaging themselves so cleverly, the average unsuspecting human being wouldn't even know they are there. Recently, an Australia-based snake catching service took to their Facebook page to share one such example of a sneaky snake.

Snake Catchers Brisbane, Ipswich, Logan and Gold Coast were called to a home in Corinda in Brisbane's west to remove a huge carpet python last week, reports 7 News. The Queensland-based snake catching service shared a photo of the 8-foot carpet python hiding in the yard of the home on Facebook, challenging their followers to find the reptile.

"Spot the snake time!" they wrote while sharing the picture, which shows a messy yard that, according to the snake catchers, made the perfect hiding spot for the python. Take a look and see if you can find the snake in it:

Stumped? Here's a hint: Bryan Robinson of the snake catching service told 7 News that residents had spotted the carpet python sliding on timber sleepers in the previous couple of days.

If you couldn't find the snake, a Facebook user encircled it in the picture. Take a look:

Mr Robinson urged Queensland residents to keep their yards clean and tidy, saying it would reduce the chances of snakes hiding there.

He added that even though it is winter in the country, carpet pythons would remain "fairly active".

Carpet pythons kill prey by constriction. According to the Queensland Museum, this non-venomous species is widespread and found throughout northern, eastern and southern Australia, preferring to live in open forests, park lands and suburban gardens.