From prison cellmates to college roommates

Six years ago, two prison cellmates became, to their surprise, college roommates. Donte Small was doing time at Maryland Correctional Institution in Jessup for assault with a handgun. Sanford Barber was in for involuntary manslaughter. Both were looking constantly to improve themselves.

One day, Barber saw a flyer advertising college courses. He signed them both up to apply. They had to interview and write letters to get in. Small wondered: "Could I make it in college? Is this possible? Is this really a thing?"

They were accepted for Goucher College's inaugural classes at Jessup in 2012. The two men proofed each other's papers, talked about assignments, took turns at an improvised desk in the cell with a toilet seat as the chair.

They sought, Barber said, "to motivate each other, uplift each other." In one class they studied the 13th Amendment, which ended slavery and involuntary servitude, and pondered the exception in it that permitted incarceration for a criminal conviction. "Blew my mind when I read it," Small said.

Now out of prison, the two reunited this week on the leafy Goucher campus in the suburbs north of Baltimore to celebrate an unusual prison-to-college story: Small is about to graduate from the liberal arts school with a bachelor's degree in computer science.

The 29-year-old from Baltimore County, Maryland, released in 2014, will don a cap and gown Friday and participate in all the pomp that Goucher bestows on its Class of 2018. He has finished his school work except for a short trip next month to fulfill a study-abroad requirement. Small said he wants to "push, challenge and change the narrative about individuals with a criminal past."

The path Small followed, starting with a college behind bars and finishing on its main campus, is not unprecedented. But experts say very few are able to do it.

"It's tragically rare in the United States," said Max Kenner, executive director of a prison education initiative at Bard College in New York and an authority on the issue.

"It's unusual mostly because of a lack of imagination," Goucher President Jose Antonio Bowen said. "It's the right thing for the country."

In 1994, Congress approved a ban on federal Pell Grant funding for higher education in prison, leading many programs to shrink or shut down. But in recent years, inmates have secured more opportunities to earn college credit.

Goucher started offering courses for credit to men and women at two state prisons in Jessup six years ago, using private money and joining a small group of four-year colleges and universities with similar efforts.

Momentum for these initiatives grew in 2016 with the launch of a federal experiment supporting prison education at dozens of colleges through Pell Grants. Among the participants are Goucher, Bard, Rutgers, Villanova, Auburn and the University of Baltimore.

Advocates hope results from the Second Chance Pell program will spur Congress to repeal the 1994 ban. Their arguments are humanitarian, social and fiscal: They cite research showing that education substantially lowers the probability that prisoners will return to crime after they are released. The state can pay major costs for incarceration of repeat offenders.

"There is a growing bipartisan understanding that the right thing for the country is to make sure that while folks are incarcerated, they have the opportunity to gain additional education and skills," said John King, who as education secretary in the final year of the Obama administration oversaw the experiment's launch.

Education Department spokeswoman Elizabeth Hill said the Trump administration plans to continue the experiment until it yields enough information for the government to set longer-term policy. The New York Times quoted Education Secretary Betsy DeVos in February as saying that reinstating Pell Grants for prisoners was "a very good and interesting possibility."

Villanova has taught inside a state prison in Graterford, Pennsylvania, for decades. Seventy-five men have earned bachelor's or associate degrees since 1986, usually finishing while incarcerated, according to program director Kate Meloney. The diplomas carry no asterisk. "This is not a charity, not something we're doing out of the goodness of our hearts," Meloney said.

Small said he is amazed at how college turned around his life.

Born in the Bronx and raised by a single mother, he attended five high schools in three states before receiving a diploma in 2007 in Baltimore County. College was not unknown to him: His mother is a teacher with a master's degree in special education. But it was far from his mind. "I wasn't offered college tours," he said. "I wasn't put in college prep. I didn't feel confident in my writing, my reading, my arithmetic skills." His last report card shows a string of D's.

Small got a job in a shoe store, but six months after high school graduation, he fell into trouble. He said his neighborhood felt unsafe. His house was broken into repeatedly. He felt a need to protect himself and his family. "It led me to start making bad decisions," he said. One day he pulled a gun, he said, and shot someone in the shoulder.

Then came the arrest, jail, a guilty plea, prison.

He stayed busy, working in a mechanic shop, and in graphic arts. He took an anger management program, studied Spanish. He hungered to improve his reading and writing skills and raise his career ambitions.

So he jumped at the chance to take free courses from Goucher. The first two, in English and political philosophy, pushed him hard. He wrote two papers a week in each subject and marveled at how much professors demanded. He was proud to earn a pair of B's.

"They were not playing," he recalled. "Not giving us any kind of break at all."

Goucher cut no slack for Small, Barber and the other students even though they were under tighter restrictions than other freshmen face, with no Internet access, no cellphones and a controlled daily routine behind razor wire. But the professors provided regular office hours inside. Classes were small, discussions intense. Small said a favorite course was introduction to theater, exposing him to texts, playwrights and stage directions. "It made me interested in art," he said.

Barber, 30, who was released last year, said the college courses changed his life, too. "It was definitely a steppingstone," he said. He took his Goucher credits to Pasco-Hernando State College in Florida and plans to earn an associate degree in information technology and then transfer to the University of South Florida. He flew to Baltimore this week to congratulate Small. 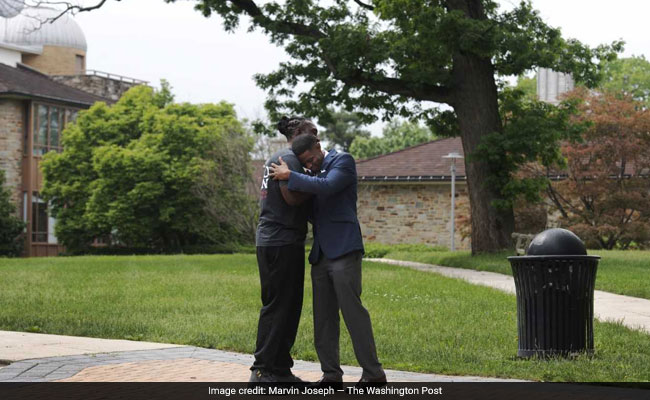 Donte Small, right, embraces former cellmate Sanford Barber on the campus of Goucher College
When Small left prison after a little more than six years, he had 27 credits toward 120 needed for a bachelor's degree. He enrolled briefly at a community college to aim for a two-year associate degree. But professors he had met at Jessup urged him to come to Goucher to finish a bachelor's. With grants and loans, he did.

He will graduate with about $36,000 in student debt that he expects to pay off after getting a job. He said he believes that his computer science degree, with a minor in sociology, will give him marketable skills. His transcript is loaded with A's and B's.

Jill Zimmerman, a computer science professor who advised Small, said she has never met a student like him. Zimmerman said she was aware that Small had been in prison but that the subject never came up in three years of working with him. He was all business, she said, focused on computer languages, computations, algorithms.

"He always wanted insight from me on what I saw when I looked at a problem," she said. "He did great - in spite of any deficiencies he may have had in his previous education - just because of his work ethic and diligence."

Small said he soaked up everything he could from professors. If he knew that Zimmerman would be available in her office at 8 a.m., he said, he might be there at 7 a.m. waiting outside her door.

Promoted
Listen to the latest songs, only on JioSaavn.com
After commencement, Small will travel with classmates in June for three weeks to the Caribbean island of Curacao to wrap up his Goucher work. He also wants to provide guidance to a younger brother who's nearing the end of high school. "That's my next task, to get him college-ready," he said.