The World's Oldest Message In A Bottle Survived 132 Years. Now It's Been Found

The dark green glass bottle, which measured less than nine inches long and three inches wide, was found in January north of Perth by a woman named Tonya Illman. 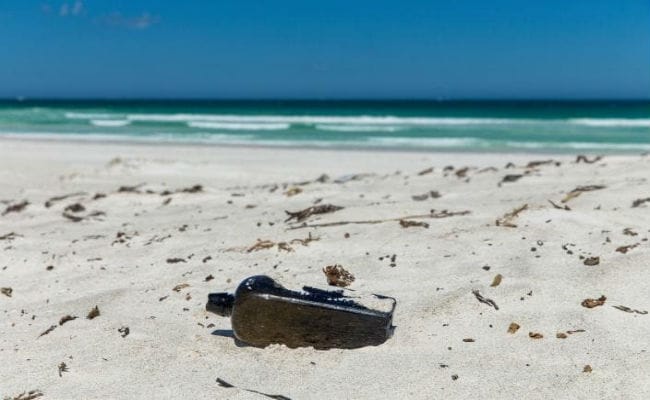 The paper had a date: June 12, 1886 and ship's name "Paula." Image: The Washington Post/KymIllman.com

Before there were computers and GPS beacons to track the ocean's whims, there were slips of paper and bottles.

Or more specifically, slips of paper in bottles.

The world's oldest message in a bottle was recently discovered in on a beach in Western Australia 132 years after it was tossed into the Indian Ocean as part of an experiment on ocean drift patterns, according to experts who call it "an exceedingly rare find."

A report released by the Western Australia Museum details how the bottle was found and what its well-preserved message reveals about science and history.

The dark green glass bottle, which measured less than nine inches long and three inches wide, was found in January north of Perth by a woman named Tonya Illman, according to a museum press release Tuesday that quotes Illman on the surprising discovery. She and a friend were walking along the dunes when she saw it near where her son's car had become bogged in soft sand.

"It just looked like a lovely old bottle so I picked it up thinking it might look good in my bookcase," Illman said. "My son's girlfriend was the one who discovered the note when she went to tip the sand out. The note was damp, rolled tightly and wrapped with string. We took it home and dried it out, and when we opened it we saw it was a printed form, in German, with very faint German handwriting on it."

After some research and excitement, the family not knowing if what they found was "historically significant or a very inventive hoax," brought their discovery to the museum. Experts there took detailed measurements of everything from the opening of the bottle to the twine wrapped around the yellowed paper inside of it. There was no cork and researchers believe it may have dried out, shrunk and became dislodged at some point. Because the paper was so well preserved, they also believe the bottle probably washed onto shore within a year of being thrown and lay buried for more than a century in damp sand.

More digging, along with help from authorities in the Netherlands and Germany, revealed that the bottle was part of a long-term German Naval Observatory program studying global ocean currents. An entry in the Paula's Meteorological Journal written by the captain detailed the bottle being tossed overboard on the same date listed on the paper. The handwriting also matched his, down the extra curl in his Cs.

"Ocean current and drift patterns are still not completely understood," it reads. "The need to understand long-term climate change patterns has also seen historic data, such as that recorded in Paula's meteorological journal and other 19th century ships' logbooks, added as datasets into global climate models."

The report links the bottle to German scientist George von Neumayer who implemented a drift bottle experiment from 1864 to 1933 that involved thousands of bottles being thrown overboard with pre-printed message slips inside. Ship captains were expected to write in details on one side of the paper and those who found the bottles were asked to fill out the back and return the notes to either to the German Naval Observatory in Hamburg or the nearest German Consulate.

Only 662 message slips were returned.

Promoted
Listen to the latest songs, only on JioSaavn.com
Before the latest discovery, the last one was found in January 1934.

Happy Teachers' Day 2020: These Memes Will Take You On A Trip Down Memory Lane