Most on social media found humour in the awkward exchange - regardless of whether it was real or an elaborately scripted situation in an attempt to go viral. 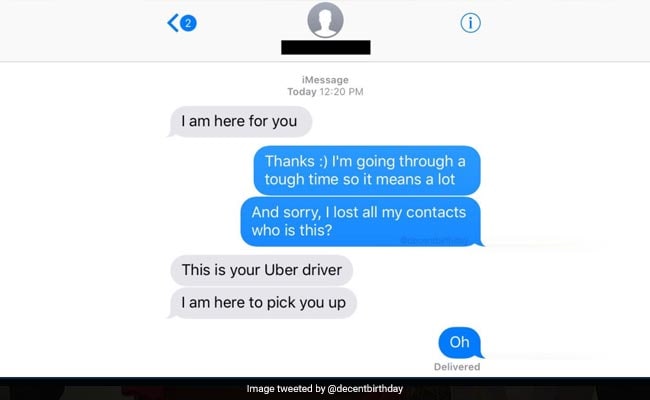 ICYMI: This screenshot appearing to show an exchange between an Uber driver and passenger is viral

In case you missed it, a screenshot appearing to show a conversation via text messages between an Uber driver and a passenger is massively viral. You may have spotted it on your social media feeds or even received it as a WhatsApp forward. The image was originally tweeted by Twitter user @decentbirthday on December 14 and instantly went viral.

It was a quiet car ride pic.twitter.com/F9ubGUoHAI

Closer to home, the image was also tweeted by author Amish Tripathi, who wrote he had received the viral screenshot via WhatsApp.

Almost immediately, people started calling out the screenshot as fake.

sorry this is FAKE because uber now disguises your phone number and it wouldn't show as a blue text it would be a green text FAKE NEWS!!!

"Absolutely fake, the first line is a set up for the joke," wrote one person on Reddit, where the screenshot was among the most upvoted posts of the day on Friday. "This has to be fake. Don't they usually say, 'I'm outside.'?" wondered another.

But most found humour in the exchange - regardless of whether it was real or an elaborately scripted situation in an attempt to go viral.

I actually don't even care if this is fake. This is fantastic.

Promoted
Listen to the latest songs, only on JioSaavn.com
Also, hang in there.— Jill (@jedichica) December 14, 2017

True? who cares? its a great story.

I tweeted this yesterday, and then texted with an Uber driver last night. My text was in green, and it was a text message, not an iMessage. Not saying this is for sure fake, but... fiction can also be  deeply inspiring. https://t.co/l5PW9l91vr

"I take this as a joke at face value and assume 70% chance it's fake (but still funny)," wrote one Redditor. "My experience with both Uber and Lyft is that the driver would call me if I wasn't already outside waiting. I've never personally gotten a text. The only one sent was the alert from Uber that the driver is outside. IMO, this seems like a funny but totally scripted text situation," commented another.

Real or not, the exchange clearly made the Internet smile.Click for more trending news