Nobody was seriously injured in the accident. 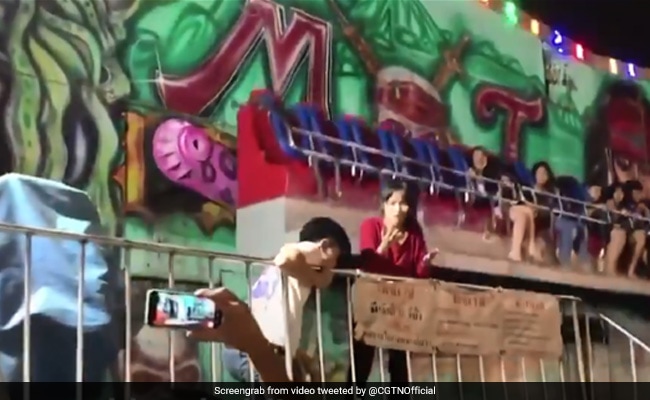 Five people managed to escape serious injury after they were thrown off an amusement park ride, a terrifying video shows. The incident occurred on November 30 at a fair in Lopburi, Thailand, according to news website CGTN. A video of the incident shows an enthusiastic crowd of people enjoying the ride before it malfunctioned and sent five of them falling to the steel platform below. 14 people were crammed onto the carnival ride.

The accident occurred after the safety bar on the Pirates of Caribbean-themed ride came loose. The metal bar popped open shortly after the ride started, and sent five people hurtling down to the steel platform. One boy was hurled over a barrier and landed on the ground.

The ride operator turned off the ride immediately. Thankfully, nobody was seriously injured in the accident.

You can watch the terrifying video of the carnival ride malfunction below:

⚠️Video: Revelers escaped serious injuries when they were thrown from a fairground ride on to the floor after the safety bars came loose at a carnival in Thailand pic.twitter.com/i1bq738Amh

"I'm very shaken by it, too. I've never seen this happen before," said one shocked onlooker, according to Daily Mail. "The people who fell out hit the floor very hard, but they kind of slid along the ground, too."

In July this year, people on a roller coaster were left dangling 100 feet off the ground after the ride malfunctioned.