"I saw that Finn was just silently staring at the camera like something from a low-budget horror movie." 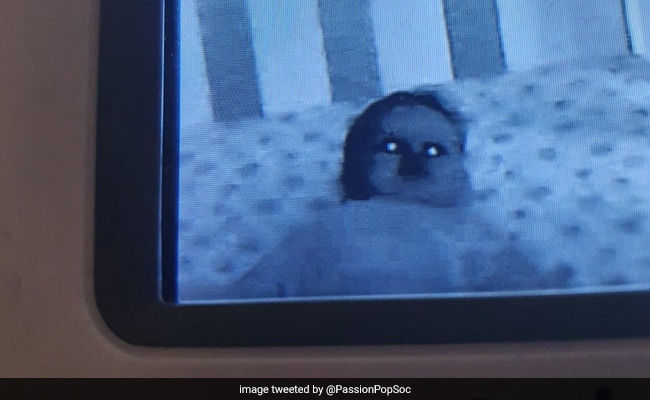 Parents who bought a baby monitor to keep a check on their son say that it was a "mistake" after looking at his picture onscreen. Elise Bannister says she couldn't stop laughing when she saw what her baby, named Finn, looked like on the baby monitor she purchased. She described it as something out of a "horror movie".

"When I first started it up and saw that Finn was just silently staring at the camera like something from a low-budget horror movie, I absolutely lost it laughing," Ms Bannister said to Today. "It was hilariously creepy. I initially took the picture to share with a group chat of friends. I had no idea it would go this far!"

The picture, posted to Twitter three days ago, shows Baby Finn in his crib, eye glowing and skin blue due to the tint of the monitor.

We got a new video baby monitor and I think that was a mistake pic.twitter.com/Cu3Qwb0baJ

The picture has gone viral with over 4 lakh 'likes' and hundreds of comments. People in the comments section can't seem to stop cracking jokes at the expense of the "terrifying" photo.

My screen flickered when I opened this pic. 😬

Mine rotated the picture 90° a few seconds after I opened it. Definitely possessed. pic.twitter.com/SWRhR9Ov9S

Is your baby baptized? If so, might want to try it again. First time clearly didn't take.

Some parents also shared their own horrifying baby monitor pics

Ah yes... an image I know too well. Our little one likes to stand up and stare right into the camera (old picture) pic.twitter.com/ZKB1t44RVe

I had a similar treat one night. pic.twitter.com/ygcesUhjS7

This is not the first time that a spooky baby pic has captured the Internet's attention. Just a few weeks ago, a mother freaked out on seeing a "ghost baby" in her son's crib that actually turned out to be something quite different.