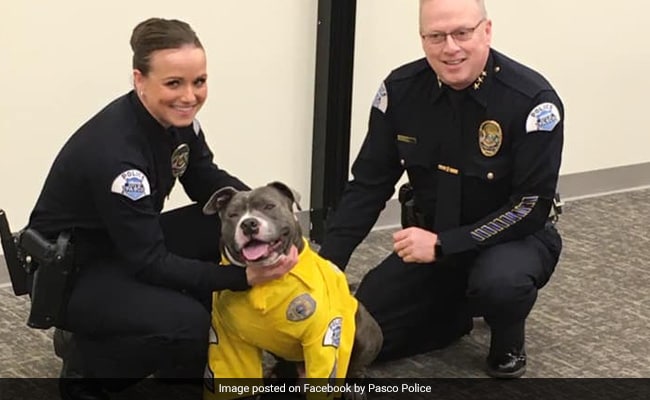 A terminally ill dog in Washington state, USA, was made an honorary K-9 officer for a day. Police in Pasco, Washington, are being praised for appointing the cancer-stricken rescue pup as police dog.

According to Fox News, the dog, named Eddie, was found abandoned and living on the street by a Benton County animal control officer in late November. Eddie, who has an inoperable tumor that causes him to be blind in one eye, was given six to 12 months to live.

He was taken in by Kristi Kesler, who created a bucket list for the pooch she lovingly calls "Eddie Spaghetti".

To make Eddie's bucket list dream come true, Pasco Police got him a custom-made uniform with real police patches. He was also sworn in as a police K-9 and spent the day on patrol.

Pasco Police on Tuesday shared photos of Officer Eddie Spaghetti on Facebook and wrote: "We want to wish Eddie all the best with his bucket list and future endeavors. It was an honor working with you today, Eddie!"

The photos have collected over 1,600 'likes' and a ton of comments.

"This makes me so happy to see!" wrote one person. "Thank you for making the time he has left filled with love," said another, while a third added, "This breaks my heart in the sweetest way!"

"I thought maybe he might get his picture taken with an officer in a car, I thought maybe if he were lucky, he might go for a car ride," said Eddie's foster parent, Kristi Kesler, to KEPR-TV. "I never dreamed it would be this big for him."

Karnataka Boy, Who Guided Ambulance During Floods, To Be Awarded On Republic Day