"Amelie fought back with great courage and refused to be subdued or taken under," said her father 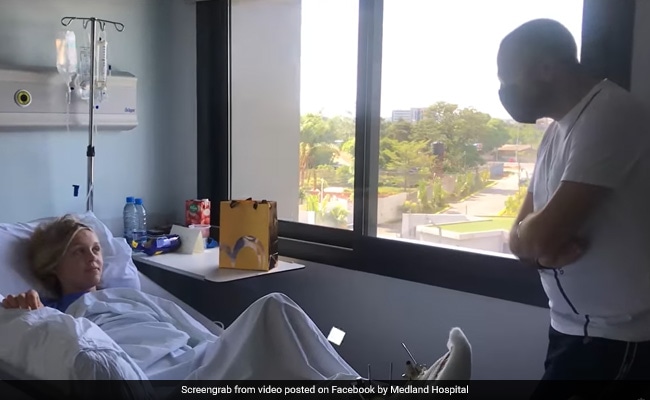 Amelie Osborn-Smith is being treated in a hospital in Zambia.

A British teenager says she is "very, very lucky" to be alive after being dragged underwater by a 10-foot crocodile and almost losing her leg. Amelie Osborn-Smith, 18, was whitewater rafting on the Zambezi river in Zambia when she was attacked on Tuesday, reports BBC. The teenager only survived thanks to the courage of her friends, who dived underwater and punched the crocodile until it released her.

Amelie's father, Brent Osborn-Smith, said that the Nile crocodile tried to drag his daughter "down into a characteristic death roll in order to subdue its prey."

"Amelie fought back with great courage and refused to be subdued or taken under," he said.

"Due to the quick thinking and intervention of all those on board, the reptile's attack was repulsed and Amelie was then brought quickly back on to the boat," Mr Osborn-Smith added.

Amelie suffered several injuries in the attack but luckily managed to escape. Her lower leg has been "badly mauled", her right foot injured and hip dislocated.

The teenager was evacuated to a hospital after being administered first aid at the spot. A video released by Medland Hospital in Zambia, where she is being treated, shows her speaking to Dr Mohamed El Sahili.

"You don't really think in that situation," Amelie Osborn-Smith told the doctor.

"People say that you see your life flash before your eyes, but you don't, you just think: 'How do I get out of this situation?'

"Your brain just goes into overdrive. I was just very, very lucky."

Ms Osborn-Smith added that she had "fully accepted" that she would lose her foot in the attack, but medics were able to save it.

The teenager, from Hampshire, is hoping to fly back home soon to be reunited with her family.