"Stupid And Absurd": Horse On A Plane Draws Angry Comments

"This 'support animal' thing is truly getting out of hand," wrote one person. 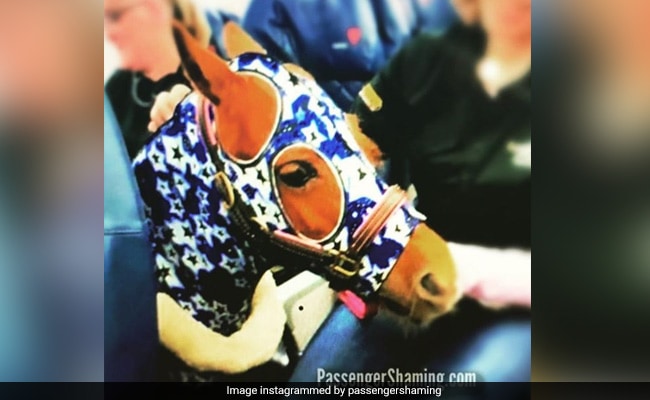 A horse was spotted on a flight recently.

Long flights can be uncomfortable and annoying even under the best of conditions, so imagine the shock of passengers who boarded their plane only to find that their co-passenger for the journey would be a horse. A photo, clicked on board an American plane, shows a miniature horse in what appears to be the economy cabin on a flight, according to The Express. The picture was shared on the popular Instagram account 'Passenger Shaming', where it has collected a number of angry comments.

The photo shows a horse, wearing a blue face mask, standing in front of two seated passengers within the plane.

"This is a legitimate, highly-trained service animal used for the blind etc. It is NOT an emotional support animal. They aren't one in the same. Just an FYI," wrote 'Passenger Shaming' while sharing the photo. The disclaimer did not stop angry commenters from criticising the passenger who brought the horse, saying that things were getting out of hand in terms of animals on planes.

"This 'support animal' thing is truly getting out of hand. Mind you, I love horses but enough is enough," wrote one person in the comments section. "Doesn't mean it's not stupid and absurd," said another.

Many also called it animal abuse. "This is animal torture," wrote one commenter, while another said: "How is that comfortable or good for the animal? Legit question!"

Some Instagram users also defended the passenger and the service horse. "There is so much ignorance in these comments. A miniature horse is usually not an emotional support animal. A mini horse guides a blind person, and outlives a dog, so they make great service animals," one person wrote.