"If you call me 'Greta of India', you are not covering my story," says Licypriya Kangujam. 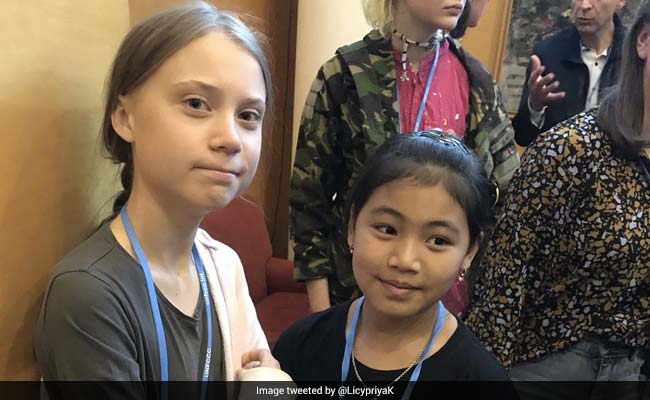 Licypriya Kangujam, the eight-year-old climate activist from Manipur who has been called 'India's Greta Thunberg', explained in a series of tweets Monday why she objected to the moniker.

"Stop calling me 'Greta of India'," wrote Licypriya Kangujam in a tweet addressed to the media. She said that the two young climate activists were working towards a "common goal" but that she had her own identity and story.

"I began my movement since July 2018 even before Greta was started," wrote Ms Kangujam, sharing a video that shows her holding a placard asking for the Climate Change law to be passed in parliament.

Dear Media,
Stop calling me “Greta of India”. I am not doing my activism to looks like Greta Thunberg. Yes, she is one of our Inspiration & great influencer. We have common goal but I have my own identity, story. I began my movement since July 2018 even before Greta was started. pic.twitter.com/3UEqCVWYM8

"I first raised my voice to world leaders in Mongolia in a UN event in July 4, 2018," she added in a separate tweet.

Since then, Ms Kangujam said, she had started a movement called "Child Movement" or "Bachpan Andolan" to call on world leaders to take immediate climate action.

I first raised my voice to world leaders in Mongolia ???????? in an UN event in July 4, 2018. Since then I started my movement called “Child Movement”. In Hindi, we called it “Bachpan Andolan” to call our world leaders to take immediate climate action. pic.twitter.com/79IQzQm2Sn

"I even dropped out my school since February 2019 (before Grade 1 final exam) when I was just 7 years old due to my protests every week in front of the Parliament House of India," Licypriya Kangujam continued.

17-year-old Swedish climate activist Greta Thunberg, in August 2018, stopped going to school every Friday and instead protested in front of the Swedish Parliament to demand more effective measures against climate change.

Ms Kangujam said that she had "sacrificed" a lot of her life at a "tender age" only be called "Greta of India" - a comparison, she said, that amounts to not covering her story.

I even dropped out my school since February 2019 (before Grade 1 final exam) when I was just 7 years old due to my protests every week in front of the Parliament House of India. I sacrificed so much of my life in this tender age is not to called me “Greta of India”.

"If you call me 'Greta of India', you are not covering my story. You are deleting a story," she said, summing up her now-viral Twitter thread.

You're awesome Licypriya! An inspiration to all of us, and someone who deserves recognition. Thank you for your work. ????

Greta is great but it really sucks that the media has been so singularly focused on her when there are others (especially poc, especially indigenous communities) who have been focused on the same goal. you are your own person and deserve your own recognition and respect

In December, Licypriya Kangujam had shared a photograph with Greta Thunberg, calling her an "inspiration".

Dear Mr. @narendramodi, Pass the #ClimateChange Law in the ongoing Parliament session. Plz save our future. I am now with my inspiration @GretaThunberg to give more pressure 2 you & the world leaders. You can't underestimate us. #ActNow#ClimateActionNow@Fridays4future@PMOIndiapic.twitter.com/byDrTDolWu

The two activists had met at the COP25 climate conference in Madrid, where Ms Kangujam had urged world leaders to "act now against climate change". She has also voiced her concerns across several international platforms and, in recognition of her work, was awarded the 2019 World Children Peace Prize.