Sreekutty the baby elephant wore a flower in her hair for her first birthday party. 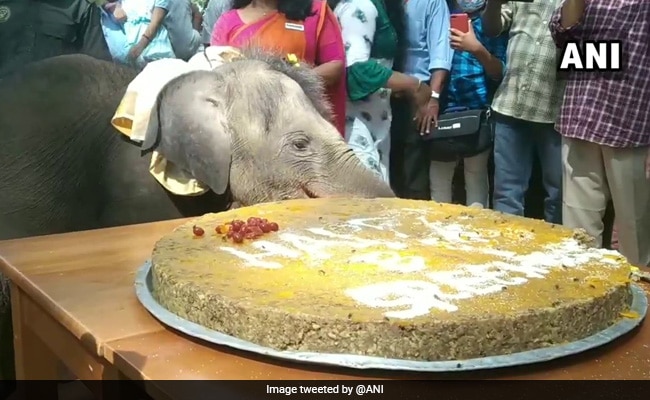 Sreekutty the baby elephant is winning hearts with her cuteness.

Sreekutty celebrated her first birthday in style. The baby elephant wore a flower in her hair and ate a jumbo birthday cake at Kottoor Elephant Rehabilitation Centre in Kerala on Sunday. Her delightful birthday party was attended by 15 other elephants and a few humans, and footage from the celebrations are winning hearts on social media.

According to a Hindustan Times report, Sreekutty was rescued from a forest with serious injuries when she was just two-days-old. Her chances of survival were slim, but Dr E Eswaran, chief forest veterinary officer (Rtd), took special care of Sreekutty and nursed her back to health.

Gradually, with a healthy diet of bananas and coconut water, and a lot of tender loving care, Sreekutty recovered.

A video from the party was shared on social media by news agency ANI and it has left viewers gushing.

She was rescued from Thenmala forest area in November last year. pic.twitter.com/989UyezceW

"Rearranging all post-corona travel plans around meeting Sreekutty on her second birthday," wrote one Twitter user.

"Sreekutty wore a yellow flower on her head for her birthday," another noted.

"When we got Sreekutty, one of her hind legs was badly injured and she had bruises all over her body. It is suspected that she was washed away in strong water currents, eventually getting separated from her parents. As Sreekutty was hardly three weeks old, chances of her survival was just 40 per cent," said Satheeshan N V, deputy wildlife warden, to the New Indian Express.

Luckily, the elephant calf not only survived but thrived. She was presented with a shawl and a cake made of rice and ragi on her first birthday.