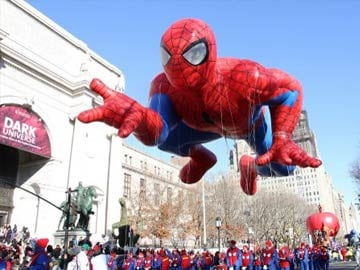 London: Scientists have developed a robot that can spin a dragline and leap off tall buildings just like comic book superhero Spider-Man.

The robot could be used to explore rocky planets with difficult terrains, for example it can spin itself a line to abseil down when it comes to the edge of a cliff, researchers said.

"Spiders travel around surface-free space between tree branches and can position themselves in mid-air," said researcher LiYu Wang.

"There is no technology that allows a robot to do the same thing except flying, and then the amount of payload they can carry becomes a major issue," said Wang, who developed the robot with colleagues at the Bio-Inspired Robotics Lab at ETH Zurich in Switzerland.

To spin the dragline, the robot uses thermoplastic adhesives, which are solid at room temperature but form a liquid when heated to around 70 Degrees Celsius, 'New Scientist' reported.

A stick of the material is fed into a small chamber and heated, before being fired out of a nozzle into the open air, where it begins to harden into a line.

As it is pushed out of the nozzle, the line passes between two motor-controlled wheels, which grab it and help to pull the cable out of the device.

Since the material has not yet fully cooled, it remains sticky, allowing the line to attach itself to any solid surface.

The robot then uses the wheels to grip as it travels down the line at a speed of around 12 centimetres a minute, said Wang.

Currently, the system only produces vertical draglines, but researchers plan to modify it to produce horizontal lines as well, allowing the robot to spin webs between surfaces.

Promoted
Listen to the latest songs, only on JioSaavn.com
This would enable the robot to carry heavy objects across cracks or craters, said Wang.