The diver said that despite the huge amount of orcas swimming in the area, there is "no special preparation" needed for these kinds of dives. 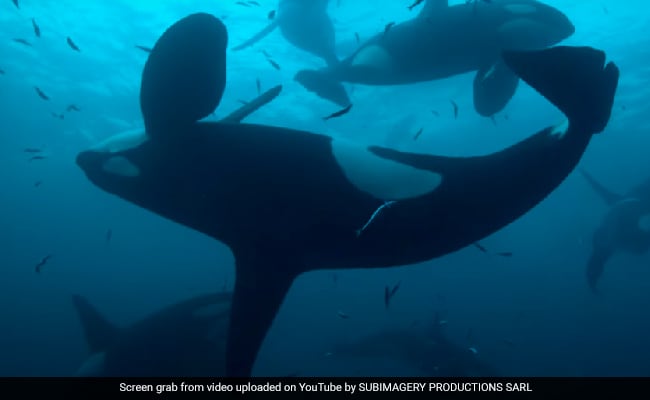 The video was taken in Skjervoy, northern Norway.

A spectacular underwater footage shared on YouTube shows a diver getting surrounded by around 50 orcas in Norway. It was shot by nature movie photographer Didier Noirot.

The video was taken in Skjervoy, northern Norway, and was posted to Mr Noirot's YouTube channel, Subimagery Productions Sarl. The caption of the post read, "After a 4000 km road trip from France to Norway, Didier Noirot meets friends in Skjervoy. From there they start a voyage on a sailboat through the fjords to look for orcas and whales feeding on herrings."

Speaking to Newsweek, Mr Noirot informed that the video was taken back in November when a huge number of orcas swarm through the fjords to take advantage of herring that escape from fishing nets. He added that he embarked on several long journeys to capture the footage.

"I left France by van, towing my rib up to Skjervoy in northern Norway where the action takes place. It is an 8,000 kilometres round trip from where I live in France...Six days travel one way...Once in Skjervoy, I rented a 46-foot sailboat...and sailed to look for orcas in the fjords. To help me, I asked three friends to join me for the trip," he told the media outlet.

In the video, one can see orca dorsal fins emerging from the water. Fishermen can also be seen in the background as the orca begin to swarm around the fishing nets. Other whale species such as humpback whales can also be spotted joining the feast.

Further, the footage, taken underwater, then shows dozens of orca swimming through the depths and catching the escaped fish in their mouths. Mr Noirot said that despite the huge amount of orcas swimming in the area, there is "no special preparation" needed for these kinds of dives. He told Newsweek that the "water is not extremely cold (+ 42.8-degree Fahrenheit) and orcas are not dangerous to divers, or any human".

Viral Video | Man Was Clicking Photos When A Bear Saw Him. This Happened Next

In the footage as well, the orca seems oblivious to Mr Noirot's presence. There have also been no recorded instances of a wild orca harming a human. As per the outlet, the only known injuries and fatalities are related to captive orca.