Snake With Smiley Face Emojis On Its Back Sells For $6,000

"One in every 20 animals can have a smiley face on it," said the snake breeder, but it's very rare to have a snake with three smiley emojis. 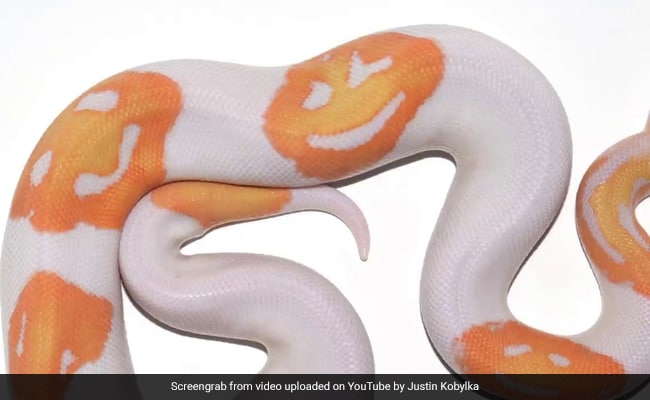 A python with smiley faces on its back has sold for a whopping $6,000.

A snake with three smiley face emojis on its back has sold for a whopping $6,000 - or Rs 4.3 lakh approximately.

Justin Kobylka, who has been breeding snakes for two decades, was not actually trying to breed emojis on his lavender albino piebald ball python. That happened quite by accident, reports CNN.

US-based Mr Kobylka was trying to achieve a specific colour combination of golden yellow and white when he ended up hatching a ball python with markings that resembled three smiling face emojis on its back.

The breeder said the snake was born after eight years of breeding pythons for the color combination, according to news website UPI. He added that while about one in 20 snakes he bred would have a smiley on its back, it was extremely rare to have one with three emojis.

"One in every 20 animals can have a smiley face on it," said Mr Kobylka while revealing that in two decades of breeding snakes, he had never seen one with three smiley faces.

The emoji patterns on the ball python are caused by recessive gene mutations from selective breeding. While mutations can occur naturally, it would be highly unlikely to find a snake like this in the wild.

The ball python is a python species native to West and Central Africa. They are among the most popular pet snakes because they are docile and easy to handle.