The old lion, named, Dark Mane Avoca got thrown around and trampled for about 15 minutes before the rest of the pride came to his aid. 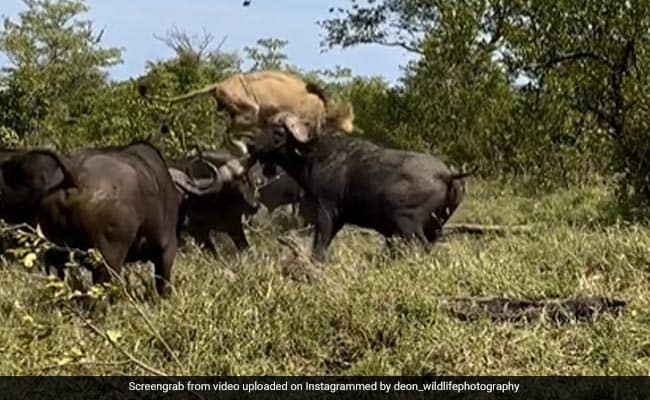 The lion passed away three days after the attack.

A video is going viral on the internet which shows an old lion trampled by a herd of buffaloes. The clip of the incident was shared by a photographer named Deon Kelbrick on Instagram who was on his safari with a group of tourists.

The video shows a herd of buffaloes attacking the old cat with their horns. The caption of the video reads, "Dark Mane Avoca male lion gets caught in between a herd of buffalo and fights for his life."

The caption further read, "The pride attempted a hunt on a herd of buffalo and things went south quickly when the whole herd retaliated with a huge stampede towards the lions and, unfortunately, the older male lion could not get out of the way quick enough because of his injury."

The old lion, named, Dark Mane Avoca got thrown around and trampled for about 15 minutes before the rest of the pride came to his aid.

The photographer informed the netizens in a comment that the lion passed away three days after the attack.

The video has amassed more than 1.5 million views on Instagram. Social media users were heartbroken after seeing the fate of the lion. Many asked about the lion's condition. A user wrote, "Omg Deon crazy attack from the buffaloes. So painful to watch and he survived all that. Any update on how is Dark Mane doing? He didn't look too good after the attack."

"Omg this was just so hard to watch can't imagine how hard it must have been for you and your guests to witness it happen. Hope he is able to pull through even though the odds are against him. Thank you for sharing," the second user wrote.

"why won't anyone help him nature is nature but those buffaloes didn't want to eat him they just wanted to kill him. After all, there are people there, this lion is getting tired," the third user commented.

The fourth expressed, "absolutely heartbreaking to watch .. nothing quite stirs up the emotions like the wilderness in all its rawness."