Satellite Captures Footage Of Lightning From Space. It's Stunning 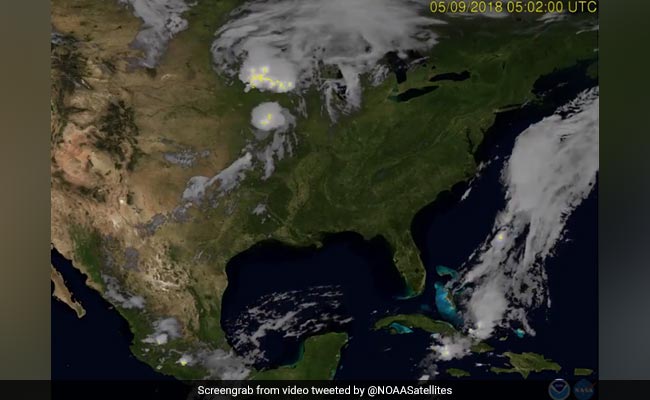 While thunderstorms leave most people afraid, watching it in the clip makes for quite a spectacular sight

Imagery of earth captured from space always makes for exciting viewing. America's National Oceanic and Atmospheric Administration (NOAA) has released a new video showing what a lightning strike looks like from space. And to say the visuals are stunning will be an understatement.

The clip shows flashes of light amid clouds above North and South America. While thunderstorms leave most people nervous and afraid, watching it in the clip makes for quite a spectacular sight.

"NOAA GOES-17 satellite has transmitted its first Geostationary Lightning Mapper (GLM) data. This GLM data in this animation shows storms quickly intensifying and forming into an impressive line across the U.S. Plains on May 9, 2018," explains the official website. The mapper helps forecast storms and their likely intensity in the Western Hemisphere by observing lightning. For instance, rapid increases of lightning indicate that a storm may strengthen quickly and lead to severe weather. Combined with other satellite data, images like this could help forecasters anticipate and issue warnings for severe weather, says NOAA.

Watch the incredible video below:

The second Geostationary Lightning Mapper to ever reach orbit has shared its first images. This initial imagery from NOAA's recently launched #GOES17 satellite captures a line of severe storms over the Plains. See the full video: https://t.co/vG1UNhouIHpic.twitter.com/RC2bsbYVGr

Promoted
Listen to the latest songs, only on JioSaavn.com
"That's incredible!" comments one Twitter user on the video. "I could watch this all day long," says another.

In early 2016, British astronaut Tim Peake posted a gorgeous time lapse showing lightning from space. "Amazing how much lightning can strike our planet in a short time," he had tweeted then.Click for more trending news