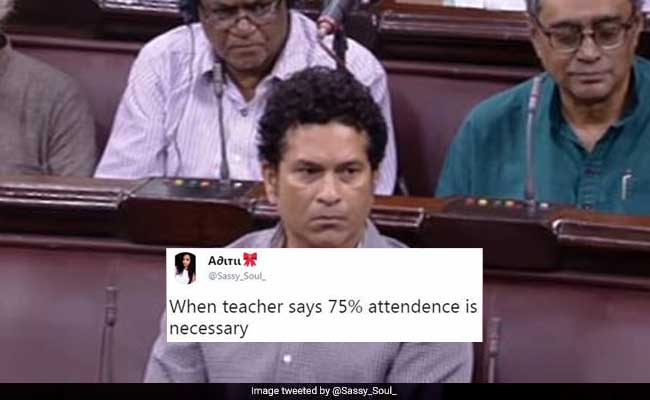 Sachin Tendulkar's glum expression has given rise to memes on Twitter.

Former Indian cricketer and Rajya Sabha MP Sachin Tendulkar was seen in the Upper House of Parliament today. But something seemed to have irked the God of Cricket, who has been criticised for his poor attendance in the Rajya Sabha. A screengrab from Rajya Sabha TV soon went viral on social media as people began to caption Sachin Tendulkar's 'glum' expression with hilariously relatable, everyday situations. Take a look at 8 of the funniest tweets:

Me when relatives come to our house#Sachinpic.twitter.com/AcRtOLkw5r

When you don't attend classes,you don't have anyone to sit next to. pic.twitter.com/NpUPezJnMH

When there's compulsory attendance for pre-placement talks in B-Schools. pic.twitter.com/2wq8LGgmcw

What sachin must be feeling sitting there.. pic.twitter.com/sxITORNJVb

Sachin- I want to speak

Mr Tendulkar has been a Rajya Sabha member since 2012.

Which meme did you find the funniest? Let us know using the comments section below.
Click for more trending news