Ukraine's new postage stamp is a tribute to the Snake Island soldiers who refused to surrender to Russian forces. 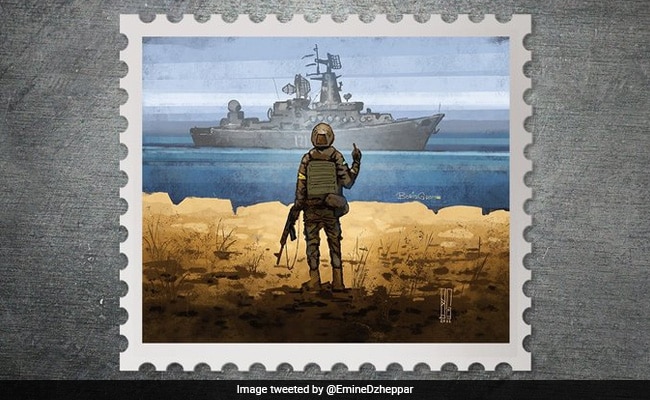 Ukraine will introduce a new postage stamp in honour of the soldiers who defended Snake Island at the beginning of the Russian invasion. On February 24, a Russian naval vessel had asked Ukrainian border guards on Snake Island to surrender. Instead of surrendering, the 13 soldiers on Snake rose to prominence for telling the Russian warship to "go f*** yourself." Initial reports suggested that the soldiers were killed when the Russian warship shelled the island in response, but news website Spectator Index later said in a tweet that they may have survived and been captured.

Ukraine's new postage stamp is a tribute to the Snake Island soldiers who refused to surrender to Russian forces. Titled "Russian warship, go f*** yourself", it features an illustration of a lone Ukrainian soldier flipping off a warship.

The stamp was the winning design in an online competition organised by the Ukrainian Postal Service, Ukrposhta. The winner of the competition, which received over 500 entries, was chosen through a public vote on social media.

Ukrainian First Deputy Foreign Minister Emine Dzhaparova announced Lviv-based artist Boris Groh as the winner on Twitter. "The sketch by artist Boris Groh received the most votes and will soon be published by Ukraine's state postal company," the minister announced.

The postage stamp named "Russian warship, go f**k yourself!" will appear in????????. The sketch by artist Boris Groh received the most votes and will soon be published by Ukraine's state postal company.
????????✌️#StandWithUkraine#StopRussianAgressionpic.twitter.com/ByYAzw2tYq

Boris Groh told Ukrposhta that he created his stamp design to "lift the mood and fighting spirit of Ukrainians, as well as to attract the attention of foreigners to Ukraine." It took him three days to design the stamp.

A few days after the events on Snake Island, The Times reported that the Russian warship that bombed the island had been destroyed in a missile fire.