"I left my whole life, my home in order to continue to have a voice," wrote Roya Heydari 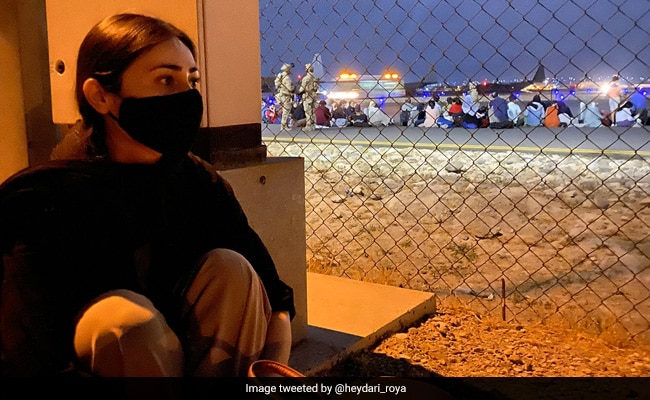 Afghan filmmaker and photographer Roya Heydari's heartbreaking post on fleeing her motherland captures the desperation and dilemma that thousands of women in the Taliban-controlled country face today. "I left my whole life, my home in order to continue to have a voice," the filmmaker wrote, underlining once again the issue of women's rights and safety under the hardline Islamic regime.

When last in power between 1996 and 2001, the Taliban had banned women from the workplace, stopped them from leaving the home unaccompanied by a male relative and forced them to wear an all-covering burqa in public. This time, the group is trying to project a more moderate image, claiming that women will have rights, including to education and work - but women in the country are worried the stance may not last. Already, there have been reports of a woman Afghan journalist been barred from working after the Taliban takeover. A Taliban spokesperson said yesterday that women should not go to work for their own safety, undermining the group's efforts to convince international observers that the group would be more tolerant towards women than when they were last in power.

In her Twitter post from Thursday, Ms Heydari shared a photo from the Kabul airport - the only way out of the country - and said, "Once again,I am running from my motherland. Once again, I am going to start from zero."

I left my whole life, my home in order to continue to have a voice. Once again,I am running from my motherland. Once again, I am going to start from zero.
I took only my cameras and a dead soul with me across an ocean. With a heavy heart, goodbye motherland.
Until we meet again pic.twitter.com/MI3H8lQ5e4

According to Al Jazeera, Ms Heydari managed to escape Kabul and reached France five days ago, spurred on by fears that she would not be allowed to work under the Taliban regime.

"Death only comes once, I'm not afraid of them killing me," she said. "What I feared was being caged, not being able to go outside and continue my work."

Her Twitter post, meanwhile, is being widely shared on the microblogging platform, where it has received thousands of messages of support.

"Kabul Airport terror attacks, despite Taliban's peace promise, are some of the reasons why Afghans are desperately trying to leave the country while leaving everything behind," said one Twitter user while responding to the post.

Roya, filmmaker and photojournalist, is one example of the massive brain drain out of #Afghanistan. #KabulAiport terror attacks, despite Taliban's peace promise, are some of the reasons why Afghans are desperately trying to leave the country while leaving everything behind. https://t.co/3nOPsq8tXV

Another encouraged Twitter users to educate themselves on the situation in Afghanistan.

If you found @heydari_roya because of her viral tweet, but haven't looked more at her photos & videos from #Afghanistan - please take the time to change that. They're a moving portrait of a country we probably only think we know. https://t.co/177tNMfNL0

"I wish you safety and a better life in your new place," a Twitter user said.

I wish you safety and a better life in your new place. My sympathies from Indonesia to all Afghans especially you. Good luck.

Scenes of desperation and chaos emerged from the Kabul airport on Thursday as coordinated explosions tore through crowds of people hoping to board flights to safety, as countries raced to evacuate as many people as possible before an August 31 deadline.