"Mark Zuckerbot at his congress hearing," tweeted one user 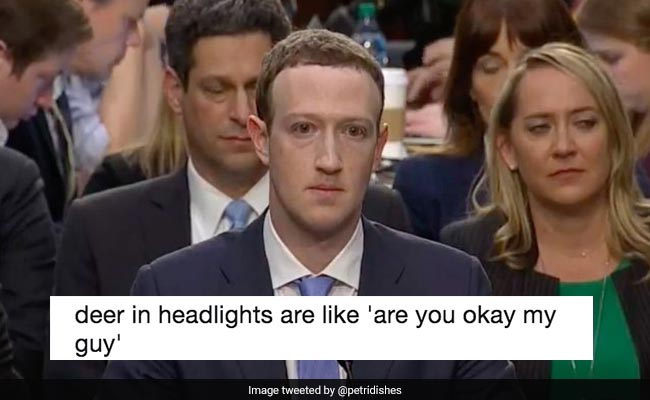 Mark Zuckerberg became the subject of many memes on Twitter.

Facebook chief executive Mark Zuckerberg appeared in front of the US Congress on Tuesday afternoon to answer questions about the mishandling of user data by his company. The founder of Facebook said he took personal responsibility for the leak of data on tens of millions of its users as he faced hours of questioning from lawmakers. However, what got Twitter's attention were not his answers, but the way he looked. Clad in a navy blue suit, Mark Zuckerberg looked visibly uncomfortable and awkward. In fact, as most people noticed, he looked distinctly... robotic.

And then the memes began:

When you're trying really hard to look like a real person and not a robot. pic.twitter.com/x5NVmg6NUI

when everything's fine and you feel great pic.twitter.com/d8wenWQfd5

Zuckerberg on his Facebook profile vs Zuckerberg at this Congressional hearing pic.twitter.com/P3bi2Ry5r4

i enjoying mysekf at the senate hearing, but then i remembered instances of regret in my life, and pain i have caused others pic.twitter.com/AdbevclhKQ

me when I realize my actions have a consequence pic.twitter.com/kNx4rL2uGl

deer in headlights are like 'are you okay my guy' pic.twitter.com/adQq827I0A

I think Mark Zuckerberg and Data were separated at birth. pic.twitter.com/UgTKo4FO5J

And even his booster seat was not spared

Mark Zuckerberg is so short he needed a booster seat...or that's his charger #Zuckerbergpic.twitter.com/NVE2ISeLAE

The Facebook chief has been under mounting pressure over the hijacking of its user data by Cambridge Analytica, a British political consultant firm. It is estimated that the firm harvested the data of about 87 million users to psychologically profile voters during the 2016 election in the US.

During his testimony at Washington, Mark Zuckerberg assured the senate that his company will do "everything" to ensure the upcoming elections in India and other countries are safe.

Promoted
Listen to the latest songs, only on JioSaavn.com
"2018 is an important year for the whole world. Several countries like India, Pakistan will have elections. We'll do everything possible to ensure these elections are safe," Mr Zuckerberg said during the hearing.