Robert Irwin Shares Video That Shows Him Being Attacked By Snake 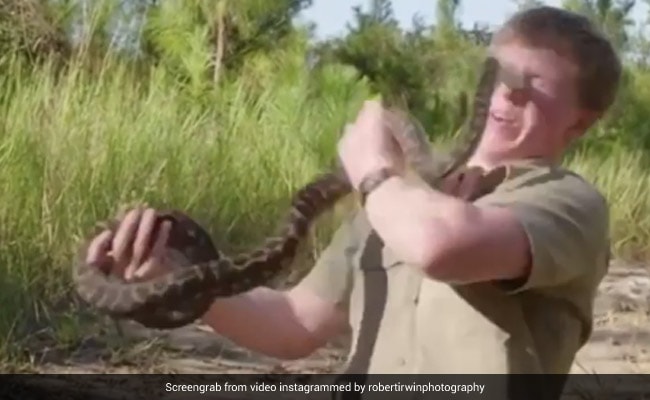 Robert Irwin was attacked by a carpet python.

Steve Irwin's son, Robert Irwin, was attacked by a snake in a video that closely resembles a similar incident that occurred with his father years ago. Robert Irwin was just two-years-old when his father, a beloved Australian wildlife conservationist and television personality, died in a stingray accident. The 16-year-old, who is a spitting image of his late father, also followed in his footsteps when it came to wildlife rescue and conservation. He today looks after the Australia Zoo along with his family and stars in his own animal documentary series.

On Saturday, the 16-year-old shared a video that shows him rescuing a carpet python before the snake strikes him. The incident occurred while Robert was filming for Animal Planet series Crikey! It's the Irwins.

"Aren't they just the coolest? I love carpet pythons. That is a good size carpet python. That's so cool. I gotta tell you, when I first found this guy.." he says, before he was cut off mid-sentence by the snake striking his face. The footage then cuts to Steve Irwin going through a similar snake attack years ago while filming The Crocodile Hunter.

"After a snake rescue with this cheeky carpet python while filming for 'Crikey! It's the Irwins' it brought back fun memories of a very similar situation that happened decades before in one of the original crocodile hunter documentaries!" wrote Robert Irwin while sharing the two clips, along with side-by-side photos of him and his father after the snake attacks.

Wait for it ???? After a snake rescue with this cheeky carpet python while filming for ‘Crikey! It's the Irwins' it brought back fun memories of a very similar situation that happened decades before in one of the original crocodile hunter documentaries! Maybe it was her way of saying ‘thanks' for being rescued! You can see how this all unfolded on our ‘Crikey! It's the Irwins - Life in Lockdown' special on Animal Planet this Saturday July 11 in the USA.

The video has collected over 3.5 lakh 'likes' and hundreds of comments.

"You're so like your father. He would be proud of you," said another.

This is not the first time that Robert has invited comparisons with his father. In February, he recreated one of his iconic photographs cuddling a koala that left social media users marveling at his resemblance to his dad.