Layla was suffering from a "life-threatening nasal blockage" 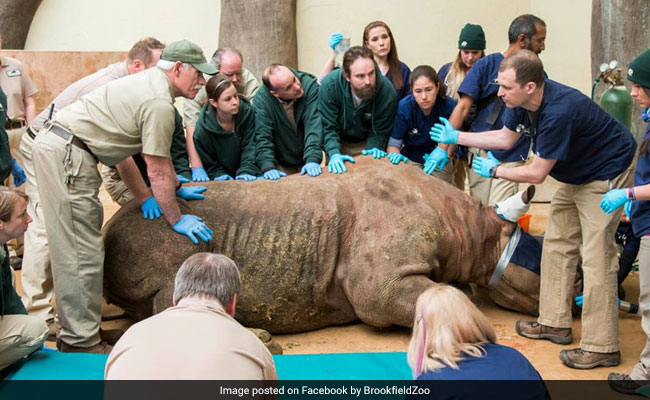 A portable CT scan was brought to Layla's habitat since shes too huge to move inside the zoo's hospital.

In what is a stellar example of animal care, a 2,300-pound (approximately 1,043 kgs) eastern black rhinoceros underwent a CT scan at the Brookfield Zoo in Chicago. Seven-and-a-half-year-old Layla is believed to be the first of her species to undergo such a procedure.

According to Brookfield Zoo, Layla was suffering from a "life-threatening nasal blockage" and needed to undergo the scan so veterinarians could determine their next steps in treating her. A portable CT scan was brought to Layla's habitat since she is too huge to move inside the zoo's animal hospital. It took nearly 40 zoo staffers and technicians to help with the rhino's CT scan procedure.


A custom-made platform was specially created for Layla. She was moved onto the platform after being anesthetized and stabilized. A front-end loader was used to place her onto the zoo's surgical table which was moved to the portable CT scanner. The team did several practice runs using concrete weighing as much as Layla to ensure there were no hiccups during the actual procedure.


In December 2017, Layla was experiencing difficulty in breathing and underwent a surgery next month to determine the problem. However, vets needed advanced imaging to treat her better.

"The CT scan provided diagnostic results that we could not have otherwise obtained," said Dr Michael Adkesson, vice president of clinical medicine for Chicago Zoological Society, which manages Brookfield Zoo. "This procedure is an example of our commitment to providing the animals in our care with the most advanced medical treatment available. More importantly, though, the CT scan on Layla has provided us an unparalleled look inside of her skull. The images we obtained will guide our future treatment plan."

With the diagnosis complete, vets are developing a plan to surgically remove the blockage causing her breathing trouble.

"Not only is Layla valuable to the rhinoceros population in professional care, she also plays an important role at Brookfield Zoo by raising awareness about the species and why conservation efforts are so critical," said Amy Roberts, senior curator of mammals for Chicago Zoological Society. "When our guests come to see Layla and our other black rhinos, we hope they will be inspired to care about these amazing animals so that future generations will be able to also appreciate them.

Last year, an eight-foot critically injured Burmese python underwent a CT scan during treatment in Odisha's Bhubaneswar. Officials said the CT scan, which took place at a private clinic, was likely the first of its kind conducted on a snake in India.Click for more trending news