The footage of the Tasmanian tiger, named Benjamin, was filmed in 1935. 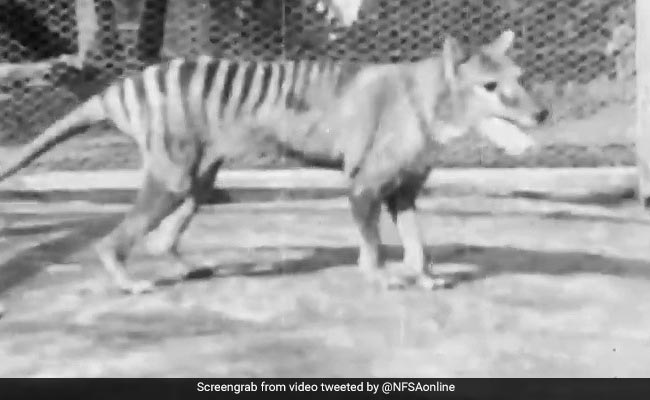 Rare footage shows the last-known thylacine, or Tasmanian tiger, in its enclosure.

A video of the last-known thylacine, or Tasmanian tiger, has been released by the National Film and Sound Archive of Australia (NFSA). Now extinct, the thylacine was one of the largest known carnivorous marsupials native to Tasmania, New Guinea, and the Australian mainland. It was also known as the Tasmanian tiger for its distinctive striped lower back.

Shot in 1935, the video shows the animal, named Benjamin, pacing his enclosure at the now-defunct Beaumaris Zoo in Hobart, Tasmania, according to a press release. It is one of the only two places where a thylacine held in captivity has been photographed - the other being the London Zoo.

Unseen for 85 years, the 21-second footage was filmed shortly before Benjamin died - marking the extinction of its species. The thylacine died a year after the recording on September 7 - a day now observed as National Threatened Species Day in Australia.

Footage of Benjamin - extracted from a 1935 travelogue called 'Tasmania the Wonderland' - was recently unearthed and digitally restored. "This is the only one in captivity in the world," the film's unknown narrator says in the footage. "The Tasmanian tiger is now very rare, being forced out of its natural habitat by the march of civilisation."

We have released 21-second newsreel clip featuring the last known images of the extinct Thylacine, filmed in 1935, has been digitised in 4K and released.

Be sure to check out the footage of this beautiful marsupial. #NFSAOpenOnline#TasmanianTigerhttps://t.co/s3JSAnmFckpic.twitter.com/FSRYXCTTMy

Since it was posted on Twitter one day ago, the video of the Tasmanian tiger has been viewed over 80,000 times.

According to The Australian Museum, thylacines once lived throughout continental Australia but became extinct on the mainland around 2,000 years ago. Its population was then confined to the island of Tasmania. " Its decline and extinction in Tasmania was probably hastened by the introduction of dogs, but appears mainly due to direct human persecution as an alleged pest," says the museum.