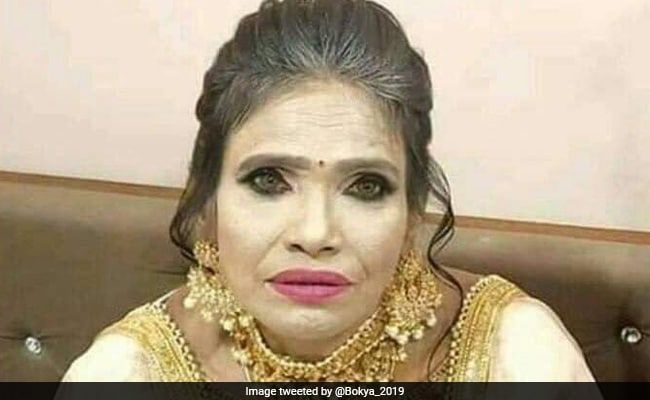 Internet sensation Ranu Mondal is in the news again - this time for her makeup look that has received mixed reviews. Pictures of Ranu Mondal, whose rags-to-riches story and melodious voice captivated the Internet, emerged on the Internet two days ago. The photos show Ms Mondal attending a recent event in a pastel lehenga and gold jewellery. It was her heavy makeup that caught the Internet's eye and led to much comment online.

The phrase "Ranu Mondal makeup" began to trend online as tweets flew. Many netizens also created memes - most of them too rude to reproduce here.

Her makeup is BRIGHTER than my FUTURE!#ranumondalpic.twitter.com/2WakKd05gf

oscar award 2020 for best make up artist goes to #ranumondal#RanuMandalpic.twitter.com/0gVWf2ysmi

It should not be troll... everyone should see her singing talent...#RanuMandalpic.twitter.com/k88Ff6pLr9

Many social media users also came to Ranu Mondal's defence. Some criticised her makeup artist, while others asked trolls to back off.

Woman gets to live the time of her life after an eternity. I accept the makeover is a disaster but that's the makeup artist's fault. She looks happy.
Not everything is a meme material.

Everyone making fun of #RanuMandal please remember that one can't change their looks,but you can certainly choose to speak logically & with kindness whilst judging her.Being in the public eye & under a scanner while she herself is a WIP ain't easy for an adult. Cut her some slack

Ranu Mondal became a household name after a video of her singing Lata Mangeshkar's Ek Pyar KaNagma Hai at Ranaghat railway station in West Bengal went viral in August. Since then, Ms Mondal has been invited to reality shows and has recorded two songs for Himesh Reshammiya's film 'HappyHardy And Heer'.

About two weeks ago, a video of Ranu Mondal brushing off a woman who tapped her on the shoulder had angered her fans, with many accusing her of being rude.