"Crazy! Notice the pine trees collapsing under the rush of the water," wrote one person in the comments section. 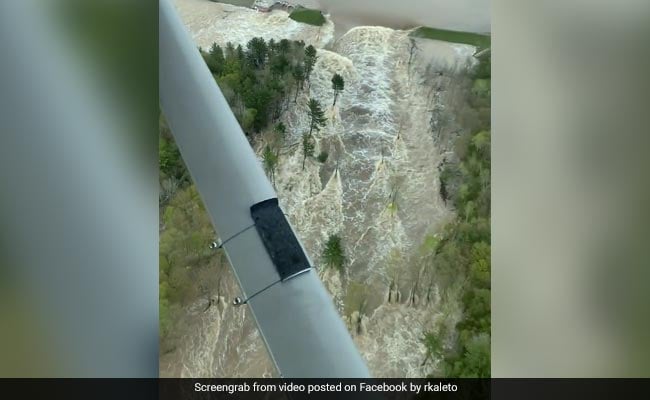 A pilot has captured aerial footage of a dam failure in Michigan.

A pilot has captured dramatic aerial footage of water pouring out of a lake in Michigan after a dam failure. According to ABC News, the Edenville Dam, along the Tittabawassee River, failed on Tuesday evening in wake of heavy rainfall in the days before. It was one of the two dam failures in the US state as the Sandord Dam began to overflow shortly afterwards. Rising floodwaters unleashed by two dam failures submerged parts of the central Michigan town of Midland on Wednesday, displacing thousands of residents.

According to Michigan Live, a video filmed from a small plane captured aerial footage the Edenville Dam breach. The video, filmed by Midland pilot Ryan Kaleto, shows the dam breaking and water from Wixom Lake flooding downstream into Sanford Lake.

Mr Kaleto shared the terrifying footage on Facebook, where it has gone viral with over a million views. "Wixom Lake will be gone by tomorrow. So devastating," he wrote while sharing the video.

The footage has collected over 19,000 'shares' and hundreds of comments along with 1 million views.

"Crazy! Notice the pine trees collapsing under the rush of the water," wrote one person in the comments section.

"Wow! How devastating. Water can be so destructive," said another.

The National Weather Service (NWS) warned of "life-threatening" flooding as water levels of the Tittabawassee River in Midland, about 120 miles northwest of Detroit, reached historic levels and were expected to continue rising.

"Never in my whole life have we seen the dam fail," said Mark Bone, 53, a business owner and resident of the city of Midland. He said no injuries or deaths had been reported as yet.

Watch: A Tiny Frog In A Fight With Leopard Has Twitter Amazed