People Complained About Stray Cat, So A Law Firm Did Something Awesome 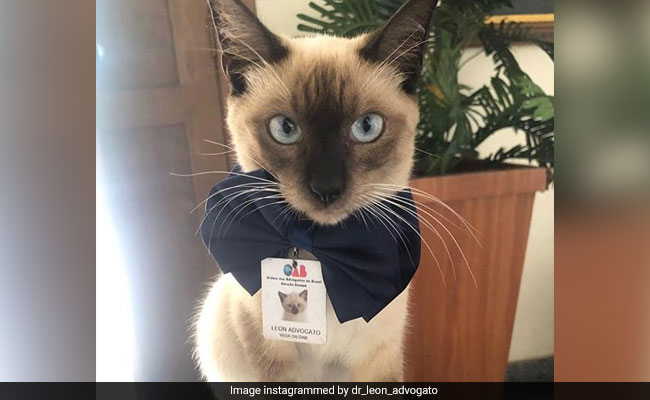 Dr Leon the lawyer cat is now loved by all his co-workers.

The best way to start Friday is with a smile, so here is a heartwarming story that will make you do just that. When a stray kitten in Brazil walked into the Order of Attorneys of Brazil building, seeking shelter from a storm, he instantly won over many of the employees. Unfortunately, some people soon started to complain about the stray cat, saying that a serious institution had no place for a pet. So the law firm came up with an innovative solution - they decided to hire the cat and make him an employee.

The cat, named Dr Leon, now welcomes people coming into the OAB building and has his own employee badge. His story went massively viral after it was posted on Facebook by Dr Jeanette Laredo last Thursday. It has collected over 11,000 'shares' and hundreds of loving comments.

According to Bored Panda, it all started in February, when the stray kitten, now named Dr Leon, walked into the Order of Attorneys of Brazil building in the state of Ampa.

"For a week, he was fed and protected in a box. Until he got hired," Dr Leon's representative told Bored Panda. But when complaints started to pour in, the law firm gave the kitten a permanent position.

"[They said] that there was no space for him because it is a serious institution. So the President of the OAB determined the hiring and gave him an employee badge.

"Today, he is very dear to everyone. Even those didn't like him got used to his presence and have fun with him," said the lawyer cat's representative.

Dr Leon now also has his own Instagram, where he dresses up professionally in neckties and displays his employee badge proudly

This isn't the first time that cats have been appointed to important positions. In Glasgow, a cat was appointed an honorary professor.