In the footage, which has sparked a huge backlash on social media, the couple can be seen holding hands while the lion cub lies between them. 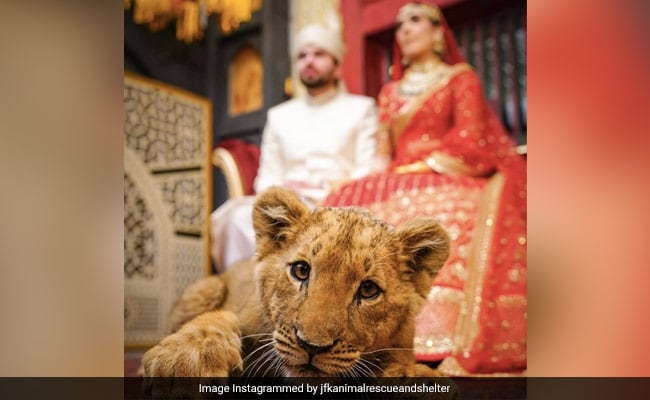 A lion cub was used in a wedding photo shoot, sparking a public outcry in Pakistan.

Animal rights organisations have raised concerns after videos of a Pakistani couple using a sedated lion cub as a prop during their wedding emerged online. The images were posted on the Instagram story of Studio Afzl - a Lahore-based photography studio, reports Geo TV.

In the footage, which has sparked a huge backlash on social media, the couple can be seen holding hands while the lion cub lies between them. The videos were accompanied by the hashtag #SherdiRani to emphasise on the presence of the cub.

Save the Wild, an animal welfare organisation in Pakistan, shared the footage on Twitter, highlighting the incident as a case of animal cruelty and requesting that the lion cub be rescued from the studio.

@PunjabWildlife does your permit allow for a lion cub to be rented out for ceremonies?Look at this poor cub sedated and being used as a prop.This studio is in Lahore where this cub is being kept.Rescue him please pic.twitter.com/fMcqZnoRMd

On Twitter, footage of the lion cub being used as a wedding prop drew huge backlash.

"Well this is shameful. No point sedating a young animal," wrote one person in the comments section.

"This is horrible. Sedating a lion cub in order for people to use them in photo props is the silliest thing I ever heard," another said.

JFK Animal Rescue and Shelter, another group which highlighted the incident on its social media, said that the cub was being kept at the photography studio itself.

A post shared by Jfk Animal Rescue And Shelter (@jfkanimalrescueandshelter)

"The studio's management told us that the lion cub was brought [to the studio] by a friend of theirs that owned it, and according to them it was a plain coincidence that the couple was also present, so they decided to take a few pictures with the lion cub," Zulfishan Anushay, the founder of JFK, told The Independent.

In an Instagram post, the organisation explained that possessing a wild animal in Pakistan is not illegal if one has a license. "How can one take legal actions when these people have licenses to own these cubs? Once you get a license in Pakistan you can treat these poor cubs as you want," they wrote.