The video shows the powerful animal slamming into the car repeatedly 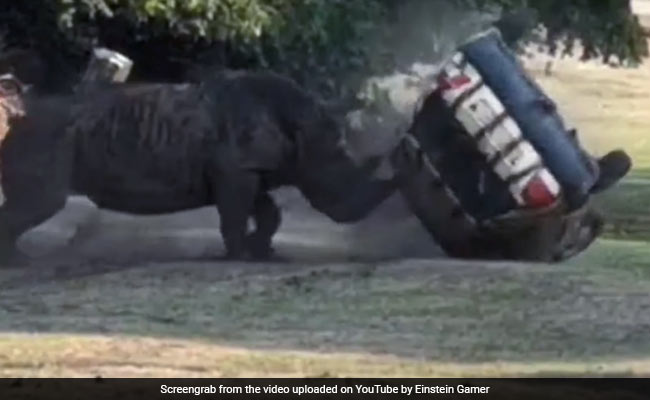 A terrifying video shows a rhino attacking a car, overturning it three times.

A shocking video from the Serengeti safari park in Hodenhagen, Germany, shows a rhinoceros attacking a car with the driver still inside. According to German news outlet Bild, the video shows 30-year-old rhino bull, named Kusini, slamming repeatedly into the car that was being driven by an animal keeper. Luckily, the keeper managed to emerge from the attack relatively unscathed, sustaining only a few bruises. Her vehicle - a small hatchback painted with stripes - was not as lucky. It was left severely damaged after Kusini's attack. The incident occurred on Sunday.

The video was filmed by 35-year-old Igor Petrov, who was touring the park along with other visitors and a guide in an open jeep.

It shows the rhino, apparently enraged, attacking the car and flipping it over three times. The vehicle's exterior and windshield dent and shatter as the powerful animal slams into it repeatedly.

According to DW.com, the park's manager, Fabrizio Sepe, said that it is not immediately clear what enraged Kusini, who has been living there for 18 months. Kusini does not present any risk to visitors, Mr Sepe added, while admitting that it might be better off in a zoo.

He also said that the keeper who was attacked is doing well and wants to return to work.