The Truth About 'Anti-Sex' Beds At The Olympics

"Beds to be installed in Tokyo Olympic Village will be made of cardboard, this is aimed at avoiding intimacy among athletes," US distance runner Paul Chelimo tweeted 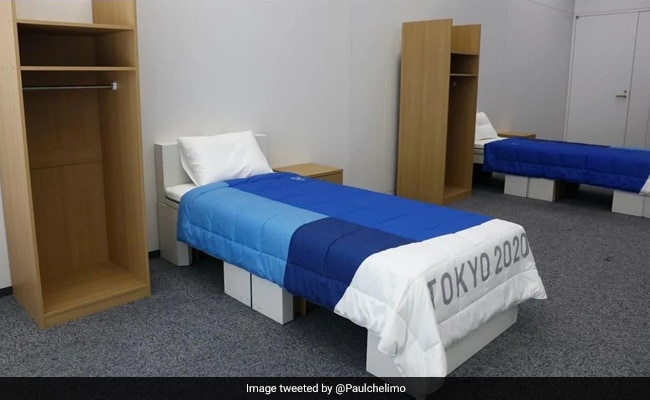 Beds at the Olympics Village this year will be made out of cardboard.

Over the weekend, social media was abuzz with various reports claiming that the beds given to athletes competing in this year's Olympics would be made of cardboard to discourage sex. "Beds to be installed in Tokyo Olympic Village will be made of cardboard, this is aimed at avoiding intimacy among athletes," US distance runner Paul Chelimo tweeted Saturday, sharing a picture of the beds in question. Several news outlets then picked up his tweet, reporting that the beds were deliberately flimsy to discourage intimacy amid the pandemic and would collapse under the weight of more than one person. The New York Post, one of the first to run the story, said that the beds were "allegedly designed to collapse under the weight of fornicators to discourage sex amid COVID-19."
These reports that were debunked by organisers on Monday.

It appears as if Mr Chelimo's tweet, meant to be tongue-in-cheek, was taken at face value by media outlets reporting on it.

Beds to be installed in Tokyo Olympic Village will be made of cardboard, this is aimed at avoiding intimacy among athletes

Beds will be able to withstand the weight of a single person to avoid situations beyond sports.

I see no problem for distance runners,even 4 of us can do???? pic.twitter.com/J45wlxgtSo

The cardboard beds at the Tokyo Olympic Village are "sturdy", organisers reassured this morning after Irish gymnast Rhys McClenaghan put them to test.

Mr McClenaghan filmed himself jumping up and down on a cardboard bed to test its strength.

"The beds are meant to be anti-sex. They're made out of cardboard, yes, but apparently they're meant to break with sudden movements. It's fake -- fake news!" he wrote on Twitter.

The official Twitter account of the Olympics then thanked him for "debunking the myth" and wrote: "The sustainable cardboard beds are sturdy!"

Paul Chelimo's tweet had kicked up a storm on social media with people wondering what lengths the organisers would go to to discourage sex.

This is the craziest story. In order to prevent Olympians from having sex, and thus risk spreading the Covid virus, beds at the Tokyo Olympic Village are made from cardboard so they collapse if more than one person gets on them! pic.twitter.com/RZKEPbcr4x

Imagine trying to get some solid rest the night before the biggest race of your life and you have to sleep on a cardboard mattress. All b/c the Olympic committee is trying to prevent you from having sex.

*looks up ‘sex during the games' in #Tokyo2020 health and safety handbook https://t.co/m4UaAYMhNz

In January, bed manufacturer Airweave had said they could withstand a weight of 200 kilos and have been through rigorous stress tests, reports AFP.

"We've conducted experiments, like dropping weights on top of the beds," a spokesperson told AFP.

"As long as they stick to just two people in the bed, they should be strong enough to support the load."

The organisers of the 2020 Olympics have repeatedly requested that players maintain social distancing and "avoid unnecessary forms of physical contact" amid the coronavirus pandemic. Despite this, organisers are expected to hand out 160,000 condoms.

"The distributed condoms are not meant to be used at the Olympic Village," the organising committee told AFP.

Instead they are supposed to be "brought back by athletes to their respective home countries and to help them support the campaign to raise awareness (about HIV/AIDS)", it added.