Rayssa Leal Won Olympic Medal At 13. You May Know Her From This Old Viral Video

A video of Brazil’s Rayssa Leal had gone viral in 2015 when she, as a seven-year-old, tried to land on her heelflip while jumping over a set of stairs 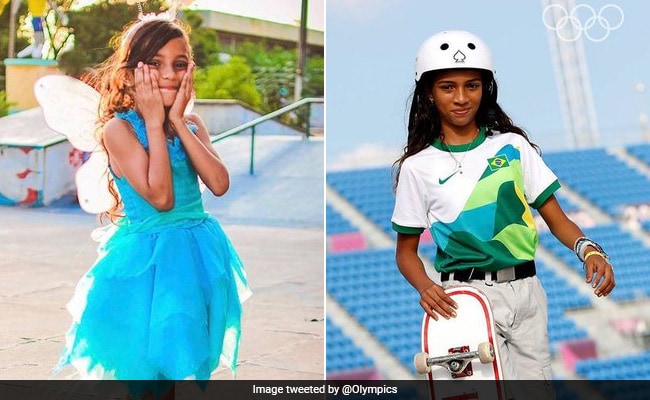 Rayssa Leal went viral at the age of seven for skateboarding in a fairy princess costume.

The official handle of the Olympics used a popular meme template to congratulate Brazil's Rayssa Leal, who won the silver medal in the first women's street skateboarding event in Tokyo on Monday. Sharing images of the young achiever as an amateur skateboarder, dressed as a fairy, and as a professional holding her board at the Olympics, the Committee's Twitter handle said, “How it started” and “How it's going”. The Committee followed it up with an “updated” image which showed the athlete with her silver medal. She was among the teenage skateboarders who bagged the top three spots in the event's inaugural appearance at the Summer Games this year.

How it started: How it's going: pic.twitter.com/CgnwTnBXEn

Even before her Olympic triumph, Ms Leal had gained immense popularity as a seven-year-old. A video of hers, which had gone viral in 2015, showed her trying to land on her heelflip while jumping over a set of stairs. She failed in her first two attempts, possibly getting hurt, too. But on her third try, she managed a perfect landing.

The video had gone viral online and the little girl was dubbed a “fairy princess” then because of her outfit. The clip is available on her Instagram page.

She has grown in her career since the two unsuccessful attempts. In 2019, during the first Street League Skateboarding world tour event, Ms Leal came in third. Later the same year, in July, she grabbed the first spot. She has then competed in several international tournaments and qualified for the Olympics inaugural skateboarding event this year.

Many people praised her effort and lauded her achievement at the Tokyo Olympics.

After seeing the image of Ms Leal dressed as a fairy, a Twitter user said she now believed in fairies.

Another user said she could be an inspiration to many children in the world.

Congrats Girl! You can be inspiration to many young children in world. Love from India

One user posted a montage of videos and images from Ms Leal's initial days to now, when she has become an Olympic medalist.

A fourth user said the thought of an Olympic winner at the age of 13 in itself is “gnarly”.

An Olympic medalist at 13? The thought is just as gnarly in itself.

Another Twitter user just wrote “butterfly skates” and posted emojis of a butterfly, skateboard, and yellow face with smiling eyes.

Momiji Nishiya, 13, won gold and 16-year-old Funa Nakayama won bronze at the event. Both of them are from Japan.