According to several reports, this walking art has been traditionally done for the students of the Nippon Sport Science University for over 30 years. 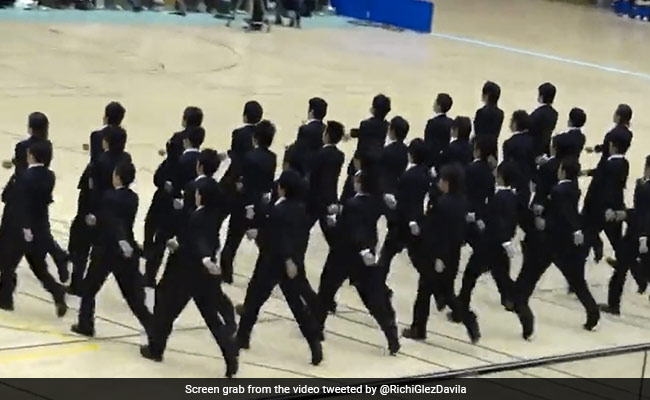 The video shows perfect coordination of the students wearing uniforms.

Japan has a fascinating and multifaceted culture; on the one hand it is steeped in the deepest of traditions dating back thousands of years while on the other, they never shy away from trying something new and made huge advancements in technology. Now, a viral video of students performing 'Shuudan koudou,' a group activity from Japan where the participants create various intersecting formations by walking in a synchronised manner in groups has amazed the internet.

The viral video was shared on Twitter by Richi Glez Davila. The video shows perfect coordination of the students wearing uniforms. This over 1-minute-long video was posted on November 6 and will blow your mind. According to several reports, this walking art has been traditionally done for the students of the Nippon Sport Science University for over 30 years.

The viral video has been captioned as, "And when you think you've already seen incredible things, you find this... 'Japanese students performing synchronized crossings'. That awful!. I find it absolutely brutal, incredible and hypnotic, and I don't want to imagine how many times they have been able to train something like that."

So far, the post amassed 2.2 million views and over 1500 views. Several users took to the comments section to express their views on this spectacular walking style.

"I've marched in formation at military ceremonies.  I've even led a few formations.  But this is mind-blowing!thanks @RexChapman," said a user.

A second user added, "We get excited when we manage to fit an extra cookie on a crowded baking sheet; this video is a level beyond deadly..."

"What I love is that they also do it dressed in a suit!" read another comment.

"I love synchronization. Drill teams, marching bands, dance groups, whomever. It's all wonderful and fascinating to me. Props to anyone who practiced for hours and hours to do things like this so I might be entranced and clap like a little kid," said another person.