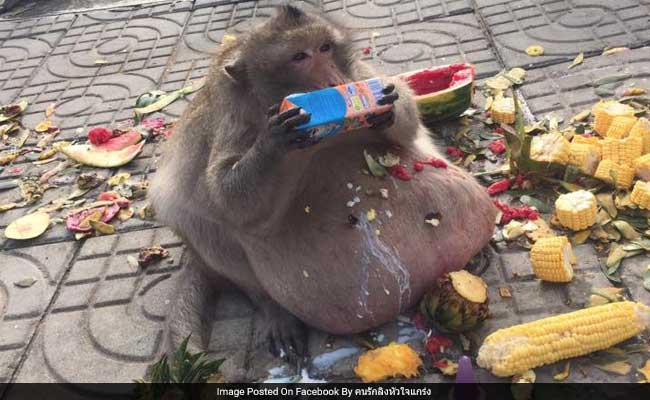 This monkey weighs a whopping 15 kilograms, which is twice what it should

New Delhi: A monkey that lives near a famous Thai floating water market in Bangkok has steadily been gaining weight after gorging on food fed to it by tourists. The monkey weighs a whopping 15 kilograms, which is almost double the standard weight for the creatures. They usually weigh between 8 to 10 kilograms. The morbidly obese long-tailed macaque is now being sent to 'fat camp' where it will be put on a strict diet and made to 'run around' with other animals.

Concerned locals alerted wildlife officials about the fat monkey - who would often snack on sugary foods including sweet corn, watermelons, noodles and milkshakes left behind by visitors.


"Our team headed out to check on it because we received reports about a fat macaque in Bangkok's Bang Khun Thien area," Kanjana Nittaya, a senior official at the Department of National Parks, Wildlife and Plant Conservation told The Nation.

The macaque was given a sedative shot and brought to a wildlife rescue centre in Nakhon Nayok province. He will receive regular health check ups there.

"We believe it is suffering from obesity because a great number of people come there and feed it. It is probably just sitting there and overeating," the official said.

"The babies love climbing on him because he always has food hidden under his fat belly."

Kawinoat MongKholtechaphat, a member of the community, says he hopes the monkey, nicknamed Uncle Fatty by locals, will return home soon.

The Daily Mail reports that he is working to ensure that monkeys remain free in the Bang Khun Thian area, since some officials and residents want to cage or remove the monkeys.