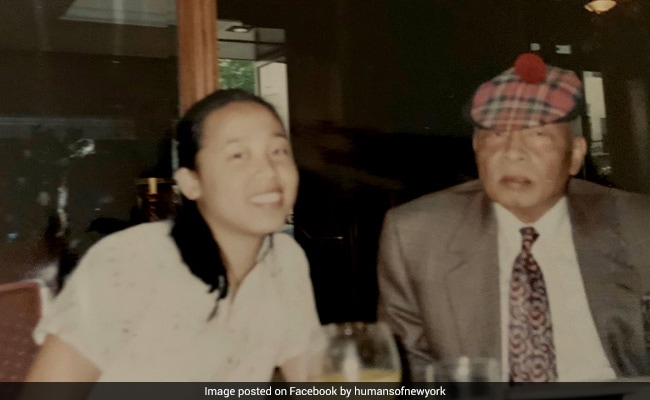 Late Sultan Ahmad Shah of Pahang with his daughter.

A woman claiming to be the daughter of the former king of Malaysia, the late Sultan Ahmad Shah of Pahang, has opened up about her life and the few times she met her father in an interview with Brandon Stanton, the man behind 'Humans Of New York'. The story of her life - which many have compared to the plot of Princess Diaries - has left the Internet stunned.

In her interview, the woman says that she was "never fully acknowledged" as the king's daughter, though the king did provide her mother with financial assistance. She was raised by her mother in the US and met her father for the first time when she was 14.

She says that her mother never spoke about her father when she was younger. "She told me: 'He's too busy. He lives in Malaysia. And he's a king.'"

The woman - who remains unnamed in the post - says that she lived alone with her mother. "We'd immigrated from the Philippines when I was six, and we were living in a rented room," she recalls. "That's not how a princess was supposed to live. But whenever I'd ask more about my father, my mother would become withdrawn."

All her mother told her was that she was working as a nurse in Malaysia when she met the king at a party. The woman says she stopped thinking about her father until the day his representative called them up. The voice over the telephone said: "I represent His Royal Highness, and we've received your letters" - she remembers.

At the age of 14, she took a week off school and flew to London, where Sultan Ahmad Shah met them for one lunch. She remembers that they were greeted by his lawyer first, who gave them cash for shopping and told them that the king would be available for lunch.

"My father had an entourage with him. During our meal he was very polite," the real-life princess remembers in her interview. "He told me I looked like my older sister."

She also says that her mother asked for financial support during lunch, which was provided. "But she also wanted paternity in writing, which was never agreed to."

Her mother did have a final request - "She insisted that I take a photo with my father."

The woman says she met her father again only twice after that lunch - both times in London and both times for an hour each.

"You will always be a princess in your own right! And your mother seemed to make a wise choice to not chase your father more than she did," wrote one person in the comments section.

"Your mum sounds like an amazing person. You're the daughter of a queen as well as a king," said another.

Sultan Ahmad Shah of PahangKing of MalaysiaHumans of New York