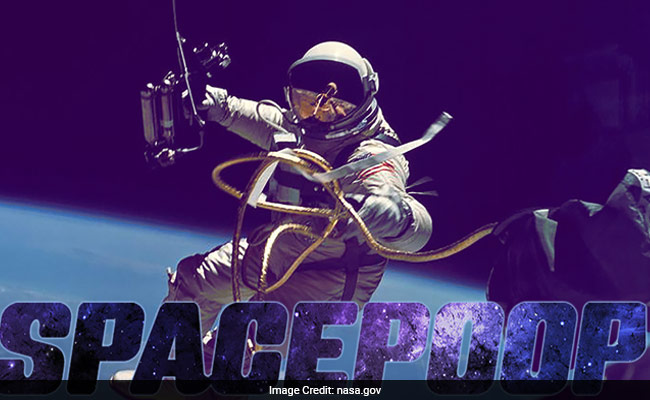 The Space Poop Challenge was led by crowdfunding platform HeroX with support of NASA.

And on the sixth day of the Apollo 10 mission, the identifiable floating object struck.

It was May 1969. As the Apollo crew headed back to Earth after a successful moon orbit, the three astronauts discovered it had joined them aboard the command module.

Commander Thomas P. Stafford, his microgravity reflexes honed on two prior spaceflights, jumped to action. "Give me a napkin quick," Stafford said, according to the flight transcript. "There's a turd floating through the air." After bickering about who did not properly use the adhesive toilet bag - an abortive attempt to deduce the poop's creator based upon its consistency - the astronauts wrangled the IFO into the waste compartment. (This was the first of two Apollo 10 fecal escapees.)

Nearly 50 years later the matter of space pooping is not completely solved. Inside a habitable satellite, such as the International Space Station, toilets with suction-generating fans collect and dump solid waste, which may incinerate in the atmosphere like shooting stars. During a rocket launch or spacewalks, however, adult diapers remain the best technology available.

Available - but not ideal. Diapers may pose a risk of irritation or infection when astronauts are confined to their suits for long durations. In preparation for expeditions such as the Orion mission, which will send astronauts to space beyond the moon, the National Aeronautics and Space Administration sought a new way for space suits to contain fecal, urine and menstrual waste for 144 hours at a go.

Enter the Space Poop Challenge, led by crowdfunding platform HeroX with support of NASA. During the 60-day challenge, 19,000 thinkers and inventors submitted 5,000 possible solutions. Some pooled their resources, working as teams. Others, like first-place designer Col. Thatcher R. Cardon, a physician and officer in the U.S. Air Force, thought up his design solo. Cardon's design, and the two other winning technologies, were announced Wednesday.

Cardon's two-part design hinged on a machine he called the perineal access port. This access port would cover an area of the astronaut called the perineum, the crotch zone below the tailbone and frontward, occasionally described as the "fig leaf area." The port was two flaps and a tiny valve - essentially, a small airlock to expel waste from the suit without losing precious oxygen supply.

He turned to minimally invasive surgery for inspiration. "You have to do a lot of complex things in a very small opening," Cardon told The Washington Post by phone.

Like building a ship in a bottle or repairing a heart valve through a blood vessel, the access port would require specialized tools to work. To get from the biological business end through the weenie airlock and into space, Cardon devised a second class of devices he called introducers.

One introducer was "a device that rides in the butt-crack, for lack of a better term," Cardon said. (Medically speaking, he added, that term for the butt groove is the "gluteal cleft.") The "hygiene wand" was fabric bunched below the perineum that would reveal fresh layers when tugged. But introducers could take any of several forms, such as gender-specific urinary catheters to suck up urine.

For his efforts, Cardon scored $15,000. The second place design, created by a group in Texas calling themselves the Space Poop Unification of Doctors, or SPUDs, involved an air flow system that pushed waste away from the astronaut and into a storage compartment within the suit. The third place design also planned to store waste, rather than expel it. British product designer Hugo Shelley came up with the "SWIMSuit - Zero Gravity Underwear," which drew out and disinfected bodily fluids into a compressible pouch.

Though none of these technologies will necessarily be directly implemented, Kirstyn Johnson, a NASA engineer specializing in space suit technology, said in a news release that, "we'll be able to use aspects of the winning designs to develop future waste management systems for use in the suit."

Promoted
Listen to the latest songs, only on JioSaavn.com
NASA may again enlist the public to tackle future problems. "Others at NASA are now thinking about ways we can leverage a crowdsourcing approach," Johnson said, "to solve some more of our space flight challenges."